Britain’s reversal on Chinese tech giant Huawei may be another sign that London is bowing to US pressure over national policy issues, former MP George Galloway tells RT’s Boom Bust.

Although the UK government said in January that Huawei could participate in the country’s rollout of next-generation 5G networks, it is now looking to phase out the company’s involvement. Purchases of Huawei gear could be banned by the end of the year, according to British media reports.

“We’re on the brink of all out economic war against China from the United States, and in this case the United Kingdom should be regarded as the 51st state of the union, because that’s how it’s now behaving. So Huawei will be just the beginning of the new Anglo-Chinese war,” Galloway said.

Boom Bust further discussed escalating tensions between London and Beijing with John Quelch, Dean of Miami Business School. The analyst believes that Britain became more dependent on the US after it began its separation from the European Union.

“I think that it’s quite possible that the Chinese would be able to retaliate economically against the UK,” he said, adding that Beijing may target specific companies like Rolls-Royce or Unilever. “In addition, China could rebalance its trade within the EU or within the European region away from the UK toward Germany and France.” 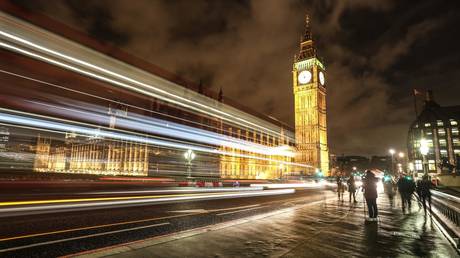