Too little too late: Central banks are about 10 years behind the times with their crypto plans, economist tells RT’s Boom Bust

Too little too late: Central banks are about 10 years behind the times with their crypto plans, economist tells RT’s Boom Bust

Central banks are trying to stay relevant in the cryptocurrency age, so they may make preposterous claims as a way of trying to get the world to pay attention to them, says economics writer Jeffrey Tucker.

“What’s interesting about this whole question of efficiency of cryptocurrency is its energy consumption or inefficiency that actually minimizes the amount of units that can be created in the cryptocurrency world,” Tucker told Boom Bust. “And we know that central banks have specialized, especially in the last 15 months, in creating unlimited amounts of currency, but that’s not what the market really desires.”

Tucker explains that “A real cryptocurrency’s value is determined by market forces, not by governments and big shots on stages at fintech conferences.”

He says: “I think this is quite implausible, I’ve doubted the idea that central banks could create a viable competition to bitcoin and other cryptocurrencies. And this, to me, just underscores the point – it’s too little too late and they are about 10 years behind the times.” 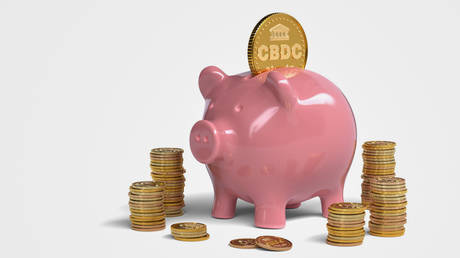