About 12,000 tons of cargo is planned to be transported this year via Russia’s Northern Sea Route (NSR), according to Petr Savchuk, Deputy Head of the Russian Federal Fishery Agency.

He was talking to journalists this week at the official ceremony to mark the world’s largest sailing ship, ‘Sedov’, arriving at the Russian Far Eastern port of Vladivostok. The sailboat, which is taking part in the round-the-world voyage, will sail further to Kaliningrad along the Northern Sea Route. According to Savchuk, that’s an important event, because the ‘Sedov’ will pave the way for all other ships and prove that the Northern Sea Route is safe for civilian shipping.

“And that doesn’t mean only oil and gas transportation, but also general cargo and fish products,” said Savchuk.

The NSR, which stretches the entire length of Russia’s Arctic and Far East regions, is expected to become a major trade route for goods shipped between Europe and Asia.

According to President Vladimir Putin, the route is “the key to the development of the Russian Arctic regions of the Far East,” and the goal is to make it a “truly global, competitive transport artery.” Putin plans on having NSR cargo traffic significantly increased up to 80 million tons a year. Ships will mainly transport liquefied natural gas, oil, and coal.

The Arctic route from Southeast Asia to Europe cuts transportation time in half, compared to traditional routes through the Suez and Panama canals. In Soviet times, it was used mainly to supply goods to isolated settlements in the Arctic. 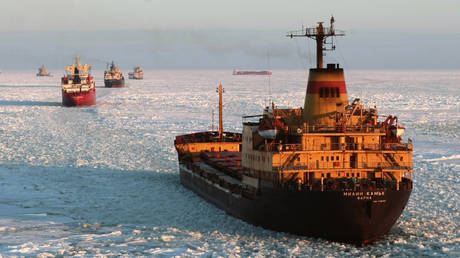