The newest battlefield in the European gas war

The newest battlefield in the European gas war

The closing of a long-term deal with a major Greek gas buyer firmly positions Russian Gazprom on the Greek market, which is turning into a battlefield for LNG exporters.

Across the planet LNG prices in May-June 2020 have dropped to unprecedentedly low levels – landed seaborne prices still remain below $2 per MMBtu, compelling rivals of LNG to counteract the trend. In the vanguard of those affected is the Russian pipeline gas monopoly Gazprom which expects its exports to drop from the peak of 199-200 BCm per year attained in the last 2 years to some 167 BCm in 2020. Pipeline gas supplies to Europe seems somewhat paralyzed currently with little to no availability of ramping up exports despite producers curbing natural gas production concurrently to oil. With this in mind, Gazprom is looking to beat its competitors on their own field, having no liquefaction facility that could realistically target European customers.

In the first days of June 2020, the Greek industrial holding Mytilineos announced that it had concluded a long-term contract with Gazprom’s commercial arm, Gazprom Export, to import Russian natural gas. The news in and of itself should not be considered as anything surprising – Mytilineos had several short-term contracts with the Russian firm in the past couple of years and imported 0.6 BCm in 2019. Were one to examine the details of the deal though, it gets much more interesting – the tenor of the deal is for 10 years until 2030, i.e. even longer than the main import contract with Russia, the one state-owned DEPA has until 2026. Under DEPA’s contract Greece has imported an average of 2.5 BCm per year from Gazprom, via the Soviet-era TransBalkan pipeline.

Neither of the parties provided additional information on the long-term contract, yet an increasingly manifest trend in Greece’s energy provision provides a seemingly fitting explanation as to why would the Russian gas giant act now. The thing is that this March-April 2020 LNG imports to Greece surpassed pipeline deliveries, a traditional domain of Gazprom. Landed LNG prices to Greece have started off this year at $3.5 per MMbtu, oscillated around the $2.5 per MMbtu mark in March-April and then took a plunge below $2 per MMbtu in the last days of April, remaining there ever since. Were it not for the increase of US LNG exports to Greece, this might not even trigger a response from Russia – Revithoussa has traditionally relied on a combination of Qatari, Algerian, Nigerian and Norwegian LNG deliveries.

As indicated above, the onset of continuous US LNG deliveries to Greece bears a much harsher reputational blow to Russian energy interests than Qatari or Algerian supplies. This year has already seen 13 LNG cargo arrivals to Revithoussa, a manifold increase over the 2019 end result of 3 cargoes in total. Coming from a fairly extended list of LNG hubs (Sabine Pass, Cameron LNG, Cove Point), US LNG calls into question Kremlin’s claim that the American shale gale would not be able to supplant Russian deliveries – it turns out it can, albeit at highly adverse market conditions. Thus, instead of the initial question whether US LNG can reach Southern Europe, the issue to follow through lies with American producers’ ability to withstand such low gas prices for a long-term period.

The winter of 2019/2020 has seen the most intensive LNG import dynamics in Greece’s history – instead of the usual 2-3 cargoes per month, the Revithoussa LNG terminal has received 5-6 per month. Purportedly this is only the beginning of a forthcoming Greek LNG ramp-up as neighboring countries in the South Balkan region turn towards LNG supplies, the bidirectional conduits and relevant infrastructure is already in place. The 2019 utilization rate of the 7 BCm per year Revithoussa LNG plant stood at a rather meagre 40%, however this year’s statistics will be significantly better unless the LNG market takes an unforeseen twist – the Q1 2020 utilization rate already climbed to 63%, rendering LNG the main source of natural gas imports.

The Revithoussa LNG terminal, the only existing LNG plant in the Balkans as of today, lies 45km to the west of Athens and serves predominantly the needs of the capital area. Concurrently to Revithoussa’s increasing intake, Greece might see the launch of another LNG import facility, this time serving the country’s north, in the form of the 5.5 BCm per year Alexandroupolis FSRU. The development of a second LNG plant coincides with Greece and Bulgaria finishing the IGB interconnector, assumed to go onstream in 2021 to allow for the cross-border movements of TANAP-supplied Azerbaijani gas – the same route would be used for Alexandroupolis volumes (Bulgaria’s Bulgartransgaz already took a 20% stake in the project company and Romania’s Romgaz seeks to do the same).

The Mytilineos deal in and of itself will not witness any major breakthrough in the upcoming years – the metallurgy and energy-focused portfolio of the Greek company necessitated some 0.6 BCm in 2019, around 12-13% of the country’s annual gas consumption. Yet it is a testament to renewed Russian interest to the Greek market, a harbinger of things to come – be they in the form of advantageous price formulas for pipeline deliveries or even straight LNG supplies sourced from reliable sources. Hence, the struggle for Russia’s share not to decrease in the Mediterranean will encompass Turkey, the hotspot of vying so far, Greece and most probably Italy, too, as all of them have seen increased levels of LNG imports in general and US supplies in particular. 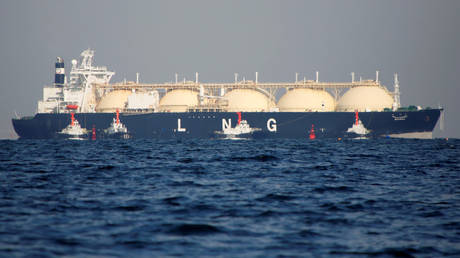