Close
Trending News
HomeBusinessThanks to coronavirus, Jeff Bezos is richer than before his divorce

Thanks to coronavirus, Jeff Bezos is richer than before his divorce

Thanks to coronavirus, Jeff Bezos is richer than before his divorce

While most people have been struggling to keep their jobs during the worst economic crisis in recent history as a result of the coronavirus pandemic, Amazon founder and CEO Jeff Bezos’ fortune has soared to nearly $172 billion.

Amazon shares jumped over four percent to a record $2,878.70 as US stocks traded higher for most of the session on Wednesday. Thanks to the rally, Bezos, who owns 11 percent of the Amazon stock, managed to break his pre-divorce wealth record of $167.7 billion.

According to Bloomberg, the wealthiest man on Earth has added at least $56.7 billion to his fortune in 2020 alone. Now his net worth is estimated at $171.6 billion – even more than it was before his costly divorce from MacKenzie Bezos, who has become the world’s second-richest woman since then.

The Covid-19 outbreak has boosted online shopping as physical stores and businesses were forced to close. The world’s biggest online retailer benefited from the shift in consumer behavior with year-on-year sales increasing 26 percent to $75.5 billion in the first quarter. The company expected them to grow further between 18 and 28 percent in the second quarter.

While the e-commerce giant temporary extended wage increases and doubled overtime pay for its workers at the height of the pandemic, and recently pledged to give one-time bonuses, some have complained that the retailer did not care enough about precautionary measures at its facilities. Amazon warehouse employees even sued their employer, claiming that working conditions not only put them at risk, but also their family members.

Bezos is not the only one who managed to increase his fortune while the deadly virus battered the global economy. In the past six months, the collective net worth of the 500 wealthiest people in the world rose from $5.91 trillion to $5.93 trillion, according to Bloomberg. 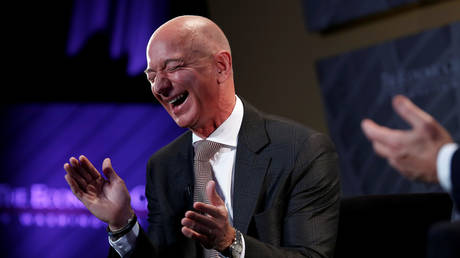 Schools reopening: Joy as millions of pupils head back to classroom and first lockdown restrictions are eased