Shares of US electric car maker Tesla extended gains to a fresh record high on Monday, pushing the value of the company past $330 billion. Investors continue to bet that the stock will soon join the S&P 500.

After closing at an all-time high on Friday, shares surged another 12 percent on Monday, with the market value rising to $321 billion, according to FactSet. Tesla is now the tenth largest US stock by market value, edging out Procter & Gamble.

The car company will be eligible for inclusion in the benchmark once it’s published four consecutive quarters of profitability, a feat many investors expect when its second quarter earnings are released after the market closes on July 22.

Tesla stock is up more than 40 percent in July alone after the company reported stronger-than-expected quarterly deliveries of 90,650 vehicles. The figure topped the Wall Street estimates of 72,000 vehicles despite a six-week shutdown of the carmaker’s Freemont, California production facility.

Earlier this month, Tesla topped Toyota to become the largest automaker in the world by market value. 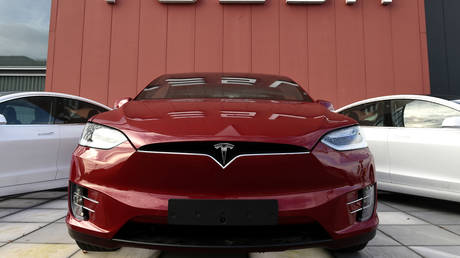