Export-dependent Taiwan has finally greenlighted imports of American pork and beef, a move that could open up Taiwan-US free trade talks. However, it is unclear how Beijing will react to such a pact, amid tension with Washington.

The suspension of the ban on imports of US pork containing ractopamine – an animal feed additive widely used in American livestock but banned in over 160 countries – as well as US beef from cattle older than 30 months, was announced by Taiwan’s President Tsai Ing-wen on Friday. Speaking at the presidential office in Taipei, she said that this “crucial step” could boost Taiwan-US ties.

Taiwan used to have zero-tolerance policy for the leanness enhancer ractopamine and introduced the limits on US pork back in 2006, despite US insistence on the safety of the drug. Beef shipments were restricted even earlier, in 2003, due to concerns over mad cow disease.

The limits on imports of US agricultural products have long been one of the main hurdles for a comprehensive trade agreement between Taipei and Washington. The talks have stalled for more than a decade.

“We know that there is still some way to go between now and signing a trade agreement,” Tsai said. “But prior to trade discussions, we must rationalize trade regulations to the same international standards and open up to other countries for mutual benefit.”

Taiwan was the US’ 14th biggest export market last year, with Taiwan-US trade standing at $85.5 billion. While the self-governed island has long been seeking US support in its independence bid, Beijing has repeatedly decried Washington’s attempts to approach Taiwan, which it considers Chinese territory.

Earlier this month, the Chinese government warned the US against attempts to meddle in Taiwanese affairs, after US Health Secretary Alex Azar visited the island, becoming the highest-ranking American official to come there on an official trip.

“On issues involving China’s core interests … the US must not harbor illusions. Those who play with fire will get burned,” Chinese foreign ministry spokesman Zhao Lijian said, commenting on the US official’s trip that came amid already heightened tensions between the two superpowers.

The US, like most countries, has no official relations with Taiwan, but Washington provoked anger in Beijing with a recent arms deal. Last month, China imposed sanctions on the main contractor of this arms sale, US firm Lockheed Martin. 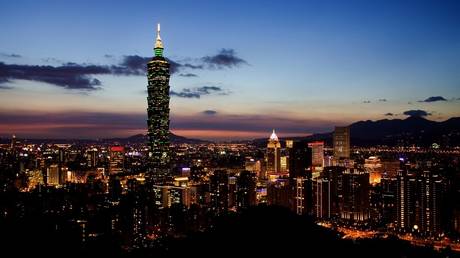