Further disregarding inflation will push the global economy to a major crisis, according to the latest report issued by Deutsche Bank economists who point the finger at the US money-printing policies.

Germany’s largest lender warned that the unprecedented levels of cash being injected into the economy while inflation fears are being dismissed will lead to excruciating economic pain if not in the near term then in 2023 and beyond.

The report points to the US’ “breath-taking” monetary stimulus that is reportedly comparable with that seen around World War II.

“Then, US deficits remained between 15-30% for four years. While there are many significant differences between the pandemic and WWII we would note that annual inflation was 8.4%, 14.6% and 7.7% in 1946, 1947 and 1948 after the economy normalized and pent-up demand was released,” Deutsche Bank notes.

Moreover, the experts forecast dire impacts from the Federal Reserve’s new framework that supports tolerating higher inflation for the benefit of a full recovery of the country’s economy after the slumber caused by the Covid-19 pandemic.

“The consequence of delay will be greater disruption of economic and financial activity than would be otherwise be the case when the Fed does finally act,” Deutsche’s economists wrote in the first report of the new series, titled “Inflation: The defining macro story of this decade.”

“In turn, this could create a significant recession and set off a chain of financial distress around the world, particularly in emerging markets,” the report added.

According to the bank’s analysts, neglecting inflation leaves global economies “sitting on a time bomb.” 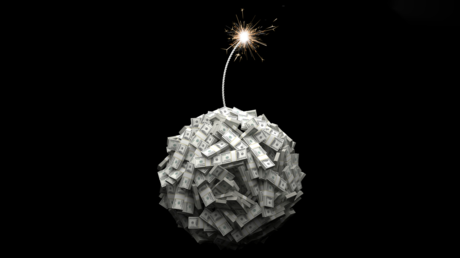