The gold share of Russia’s foreign exchange holdings rose to 22.9 percent over the year to June 30, 2020, according to data revealed by the country’s central bank.

According to the statistics, which is commonly published with a six-month lag, the value of gold in the country’s forex reserves is higher than the value of the US dollar for the first time ever. In monetary terms, holdings of the precious metal totaled a reported $128.5 billion against $124.6 billion nominated in US currency.

Russia’s international reserves are highly liquid foreign assets comprising stocks of monetary gold, foreign currencies, and special drawing right assets, which are at the disposal of the Central Bank of Russia and the government.

The assets have been steadily growing over recent years and have exceeded the half-a-trillion-dollar target set by the regulator. The forex reserves totaled $593.6 billion by the end of last year.

The Central Bank of Russia had been increasing the euro and yuan holdings since March 2018, when Washington introduced sanctions against Russian individuals, forcing the regulator to eliminate the reliance of the Russian economy upon the US dollar. The regulator also started gradually selling US Treasury securities, decreasing its share of the assets from $100 billion in 2018 to just $3.8 billion in March 2020.

The country’s monetary regulator stopped purchasing gold in April 2020, with the holdings of the precious metal remaining at 73.9 million ounces. However, global prices for gold have seen a massive growth of nearly 25 percent over the past 10 years, inevitably boosting the price of Russia’s vast holdings. 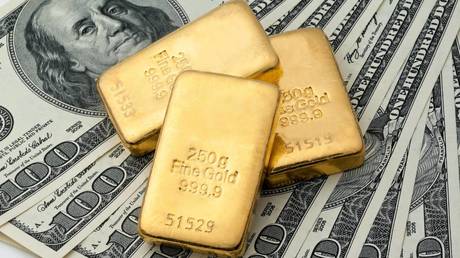