Authorities in Russia’s Far Eastern Sakhalin island have unveiled plans to build hydrogen production facilities, with the goal of exporting the commodity by 2025 and reaching annual output of 100,000 tons by 2030.

According to the vice president of state energy giant Rosatom Overseas, Anton Moskvin, hydrogen exports could come into full swing by 2025.

“We plan to enter production by 2024, the first volumes are planned to be exported in 2025. We are in export consultations with Japanese and Korean customers. We signed the first agreement with the Japanese in 2019, and during this time we worked out a preliminary feasibility study for organizing a hydrogen supply chain from Russia to Japan. Sakhalin was considered a key site,” Moskvin said. He also noted that the project will unite all “the key elements of the chain of cooperation of a full-fledged hydrogen cluster.”

Rosatom Overseas, industrial gas producer Air Liquide, and Sakhalin regional authorities signed a deal in April under which they will study the possibility of creating the ‘Eastern Hydrogen Cluster’, with plans to set-up ‘green coal’ and ‘green LNG’ production facilities, wind farms, and geothermal power plants.

They also intend to develop technologies for the utilization and processing of CO2. This could make the region Russia’s first to launch a carbon-neutrality program. If the Sakhalin hydrogen cluster is successful, Russia could replicate the project in other regions of the Far East, authorities say.

At the EEF on Friday, Russian President Vladimir Putin expressed approval of the hydrogen cluster project, instructing Sakhalin authorities to step up work on it. 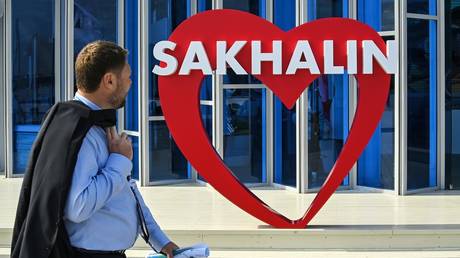 China to use Eastern Economic Foru...