Russia’s state defense conglomerate Rostec has signed 230 billion rubles ($3.1 billion) worth of contracts for the supply of 161 aircraft during the MAKS 2021 Air Show.

“The structures of the Rostec state corporation reached agreements to supply 161 aircraft. In particular, UAC will deliver 58 Sukhoi Superjet 100 and 19 regional Il-114-300 airplanes to customers. Russian Helicopters concluded agreements to deliver 84 helicopters, including the Mi-171A3, the Ka-62, the Mi-38, the Mi-8, and Ansat [models],” Rostec CEO Sergey Chemezov said, as cited by the company’s press service.

The company presented about 500 products at the air show with some 50 newly developed models, including airplanes, helicopters, unmanned aerial vehicles, engines and many more.

“The outcome of the air show exceeded our expectations. Our companies inked agreements with partners amounting to 230 billion rubles,” Chemezov stated.

Among the state-of-the-art developments unveiled by Rostec at MAKS-2021 is Sukhoi’s new single-engine supersonic stealth fighter Checkmate, designed to rival the US F-35, but intended to be superior in quality yet far cheaper. 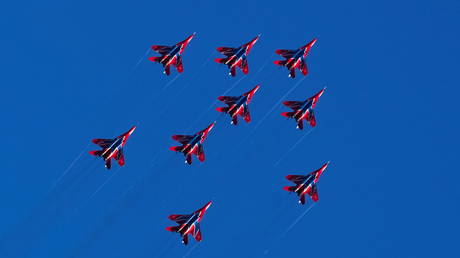 ‘It’s making me question my future...