Gazprom stock plunged on Wednesday after the Russian energy giant reported its first quarterly loss in nearly five years as the coronavirus outbreak crippled gas demand and led to the devaluation of the ruble.

The supplier reported a net loss of 116 billion rubles (nearly $1.64 billion) for the first three months of this year – a huge decline compared to the same period last year, when it had a net profit of 536 billion rubles ($7.5 billion). The last time Gazprom faced losses was in the third quarter of 2015, when it reported a loss of nearly two billion rubles.

The energy giant explained that the figure was mainly a “paper” loss and came as the ruble fell sharply in March, when Covid-19 was gaining momentum. The “extremely unfavorable” situation on the global energy market also had an impact on the company’s performance, according to Gazprom’s deputy chairman Famil Sadygov.

“Under these conditions, the financial results that the company showed in the first quarter can be considered, to put it mildly, not bad,” he said as cited by Russian media.

As the pandemic hit almost all exporters of Russian blue fuel, both demand and gas prices decreased, dragging down export revenues. Gazprom’s operating profit dropped 36 percent, while sales revenues from one of its key markets, Europe, and other countries nose-dived 45 percent. That dragged revenue down almost a quarter to 1.74 trillion rubles ($24.4 billion).

Apart from the pandemic, a warm winter season and rising LNG supplies from other exporters, including the US, which want to grab their share of the lucrative European market, could have also affected the Russian energy giant’s sales.

As the stock market opened in Russia on Wednesday, Gazprom stock fell over five percent. As of 10:30am GMT, it was trading around 183 rubles (around $2.6) per share. 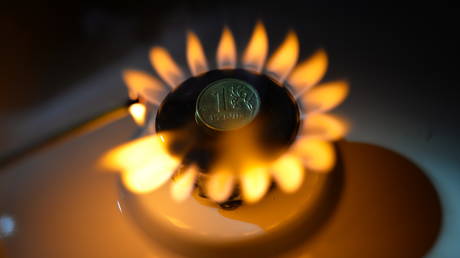