Russia’s main index on the Moscow Exchange has reached a new historic peak for the second time in a week following gains in equities trading in Europe and the US as investors anticipate more economic relief.

The Moscow stock exchange (MOEX) was closed on Thursday for a public holiday and is now catching up with global peers. The MOEX rose by more than two percent to a new record of 3,462 points on the last trading day of the week. Friday’s rally marked the second milestone for the main ruble-denominated index of the Russian stock market in just days.

Russian energy companies enjoyed the largest gains, with shares of nickel and palladium miner Nornickel jumping over five percent to their new maximum price. Rosneft, Novatek, and Gazprom were up over four percent boosted by positive dynamics in global oil prices.

The Russian stock market followed the upward trend in Asia and Europe. The pan-European STOXX 600 was up 0.6 percent on Friday. Both Germany’s DAX and France’s CAC 40 climbed around 0.7 percent, while the British FTSE 100 was the only one of the three major European indices to slightly fall. Earlier in the day, Asian shares saw record highs, with Japan’s Nikkei rising to a three-decade peak.

US equities were also poised to extend their Thursday gains, with futures tracking Wall Street’s three main indices – the Dow Jones Industrial Average, the tech-savvy Nasdaq, and the S&P 500 – moving higher ahead of the crucial jobs report.

Global equities were on the rise after the US Congress confirmed President-elect Joe Biden’s election victory. It is believed that investors hope the new administration will bring more fiscal stimulus to override the impact of the pandemic, while coronavirus vaccines could further facilitate reopening and recovery of the economies. 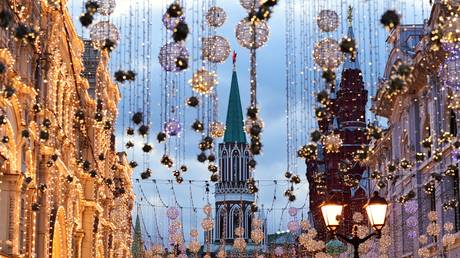 UAE to reopen borders with Qatar a...

Trump would have to quarantine if...