The ruble will undoubtedly rebound from recent losses as it has done before, Russian presidential spokesman Dmitry Peskov said after the currency touched multi-month lows on Tuesday.

The US dollar rose around 0.8 percent against the Russian currency, which was trading at near 80 rubles to one US dollar, as of 8:30GMT – the lowest level since April. The ruble also hit its lowest exchange rate against the euro since January 2016.

“Of course, there’s currently volatility in the exchange rate. It’s hard not to notice it,” Peskov said. “After periods when the ruble loses its strength, there are periods when it regains its strength.” Now the most important question is how long it will take the ruble to recover, he added.

The drop in the Russian currency coincided with the rise of coronavirus cases in the country. Negative investor sentiment and low oil prices, which were down in morning trading amid concerns over the possibility of new coronavirus restrictions, also affected the ruble exchange rate.

Last week, the Ministry of Economic Development said the ruble had weakened due to temporary factors, such as rising geopolitical strife and other risks felt by the financial markets. According to the ministry’s predictions, the average annual ruble exchange rate this year will stand at 71.2 rubles to one US dollar, and the Russian currency is set to rebound to fundamentally sound levels from late 2020 to early 2021. 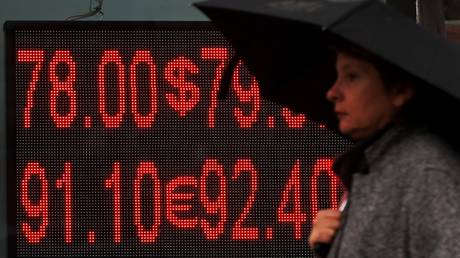