The first vessel set off for its inaugural voyage earlier this month from the port of Murmansk, piloting a dry-cargo carrier to the entrance of the Gulf of Ob in the Russian Arctic. The icebreaker is scheduled to return to Murmansk in mid-December to replenish supplies before starting its next mission across the NSR.

“The Arktika’s voyage to Ob Bay has shown its high efficiency at sea,” Leonid Irlitsa, an adviser to the Chief Executive Officer of AtomFlot, said.

The crew got a chance to get used to the vessel and assess its performance, according to the official.

The ‘Arktika’ is the flagship of Project 22220, which will see a new Russian fleet of the world’s biggest and most powerful nuclear-powered icebreakers. The icebreaker is made for independent pilotage of vessels. Its double-draft design allows it to be used both in Arctic waters and in the estuaries of polar rivers.

Its construction started in June 2016 in St Petersburg. Next year, the vessel will be supplied with a new electric propulsion motor on the starboard side to increase the ship’s power capacity.

The ambitious project includes four more nuclear-powered icebreakers, two of which, ‘The Sibir’ and ‘Ural’ will be put into operation in the coming years. The ‘Yakutia’ icebreaker is under construction, while the ‘Chukotka’ is in the early stages of development. 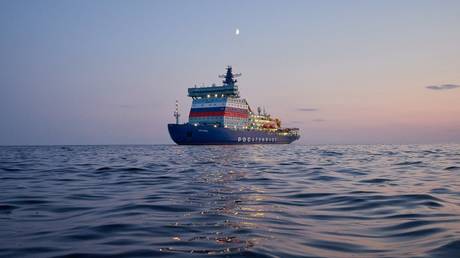 From Russia with wheat: Exports by...