Moscow expects gas supplies through the Nord Stream 2 pipeline to begin by the end of 2021, Minister for Energy Nikolai Shulginov told reporters on Thursday, during the first day of Russia’s Eastern Economic Forum (EEF).

“I think that gas pumping via Nord Stream 2 will start this year,” he said. The minister was echoing earlier statements by the pipeline’s sole stakeholder, Russia’s state gas producer Gazprom, which expects 5.6 billion cubic meters of natural gas to be delivered via the Nord Stream 2 pipeline by year’s end.

“Demand is high in Europe, as gas storage facilities are not fully filled, so this demand will continue in the near future,” Shulginov said in an interview with Rossiya-24 channel at the EEF.

It was reported at the end of July that Nord Stream 2 was 99% complete, with only 15 kilometers of the 1,200 kilometer-long pipeline left to be constructed. Nord Stream 2 consists of two pipelines capable of delivering 55 billion cubic meters of Russian gas per year through the Baltic Sea to Europe. The first section of the pipeline was finished in June.

Work on the pipeline was suspended for a year in December 2019 after Swiss pipe-laying vessel Allseas abandoned the project due to possible US sanctions. Washington repeatedly attempted to hinder the construction process with sanctions, dubbing the project Russia’s geopolitical “weapon” and siding with ally Ukraine, which believes Nord Stream 2 will deprive Kiev of transit fees. Russia, however, has repeatedly called the accusations groundless, stressing that the aim of the new pipeline is to ensure Europe’s energy security.

“You know that the project is close to completion. We hope that it will be launched and will play a very important role in ensuring the energy security of Europe.

This is an exclusively commercial project that cannot pose any threat to anyone. We firmly disagree with the joint US-Ukrainian position that this project allegedly poses a threat to Ukraine and to Europe as a whole,” Russian presidential spokesman Dmitry Peskov said, speaking on the sidelines of the forum.

The three-day economic forum, currently underway in Russia’s east-coast city of Vladivostok, will last through September 4 and is scheduled to host over 70 business events. 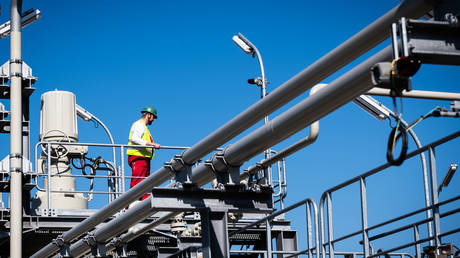 ‘We need to start believing victim...

China’s trade surplus with US...