Demand for new cars rose in Russia last month, with sales surging as much as 3.4 percent compared to the same period last year, while growing coronavirus uncertainties still affect the auto industry in many European countries.

Russian customers bought over 154,400 new cars and light commercial vehicles in September, according to the Association of European Businesses (AEB) data. The previous month marked another positive result for the Russian car market, which started showing signs of recovery at the beginning of this quarter. In July, car sales were up around seven percent, but the growth did not continue in August, with purchases falling 0.5 percent. Despite the drop,the Russian car market was recognized as Europe’s second largest at the end of summer.

While total sales advanced in September, registrations in the first nine months were still down by almost 14 percent from the same span a year ago.

Industry leaders and analysts say that last month’s increased demand could be linked to growing coronavirus uncertainties and the state of Russia’s national currency, the ruble. The ruble fell around seven percent against the dollar and was down around five percent against the euro for the last month.

READ MORE: Sales of electric cars growing in Russia but trend not exactly catching on

“Continued fall in the ruble exchange rate certainly supports the increased demand for cars,” Artyom Zyabin, the head of the analytical department at one of the country’s largest dealerships, Avtomir, said as cited by Russian media.

Analysts from another major Russian auto dealer, Rolf, agreed that the weakening ruble could be one of the key factors spurring demand. According to business development director at Rolf, Vladimir Miroshnikov, car lovers are rushing to buy vehicles before possible price spikes.

“Traditionally September is a good month for the automotive business. Besides deferred purchase demand and weakening ruble, lower travel activities and the state support measures led to the third growth month this year,” Thomas Staertzel, chairman of the AEB Automobile Manufacturers Committee said earlier this week.

The Russian car market seems to be in better shape than some of its European counterparts, at least judging by September’s performance. Only a few European countries saw increased car sales, including Europe’s biggest auto market, Germany, and Italy, where new registrations also climbed for the first time this year.

New car sales in the UK tumbled over four percent last month, hitting the lowest level in over two decades. Meanwhile, new car registrations in France are believed to have declined around three percent in September, rebounding after a dramatic decline a month earlier, when year-on-year sales fell by nearly a fifth. The car market in neighboring Spain is also facing a setback, with car sales declining around 14 percent in September, extending the sharp decline recorded in August. 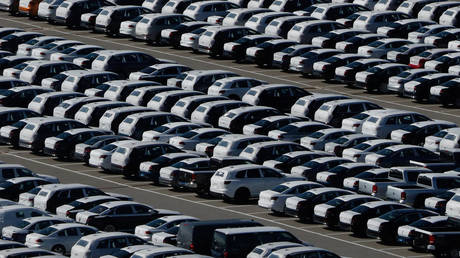