Switching from the US dollar to trade in national currencies is one of the most prospective areas of cooperation for the Shanghai Cooperation Organization (SCO), according to Russian Prime Minister Mikhail Mishustin.

Speaking at an SCO meeting on Monday, Mishustin said the “development of alternative, dollar-independent settlements” is an important issue. “We consider it promising to expand the practice of mutual settlements in national currencies,” he stated.

The PM stressed that the members of the organization should work on a coordinated approach on the matter and further discuss the funding mechanism for SCO projects.

During the SCO summit held earlier this month, one member of the group, Kazakhstan, also voiced support for boosting trade in national currencies between the partners. President Kassym-Jomart Tokayev said unlocking the economic potential of the alliance is an urgent task given the rise in protectionism and the disruption of international supply chains. Creating a roadmap for a gradual increase in the share of national currencies in mutual settlements as well as launching a Eurasian financial advisory mechanism could facilitate this task, he said.

The SCO was established in 2001 by six founding states – Russia, China, Kazakhstan, Kyrgyzstan, Tajikistan and Uzbekistan. Prior to that, all of the above countries, except for Uzbekistan, were members of a political association known as the Shanghai Five. The SCO has since expanded, with India and Pakistan receiving the status of full-fledged members in 2017. The member states are home to almost a half of the world’s population and account for around one-fifth of global GDP. 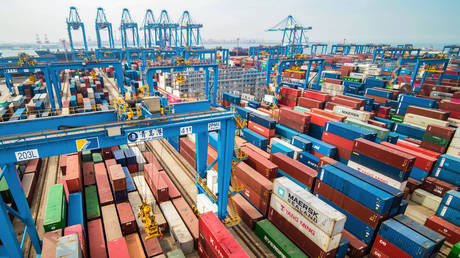 Why did bitcoin suddenly erase...