Russian gold and foreign currency holdings hit almost $569 billion as of July 1, according to the latest data released by the country’s central bank.

The international funds increased by $2.7 billion, or around 0.5 percent, compared to the previous month. They rose by more than $50 billion since last July.

The state international reserves are highly liquid foreign assets comprising stocks of monetary gold, foreign currencies, and Special Drawing Right (SDR) assets, which are at the disposal of the Central Bank of Russia and the government. The current level of holdings is higher than the target of $500 billion set by the CBR several years ago.

Russia has been boosting its reserves for four years running. The country is also reshaping its international holdings, cutting the share of the US dollar in favor of other currencies and gold.

According to the central bank, foreign currency reserves fell 0.1 percent in June to $438 billion. At the same time, reserves of monetary gold grew by 2.5 percent, amounting to $130.8 billion.

Russia also boosted gold production which was up 3.8 percent in the first quarter of the year compared with the same period of 2019. Production for the period included 65.87 tons of mined gold (up over seven percent), according to the Finance Ministry. Accompanying mining stood at 5.6 tons, while secondary mining was slightly down to 9.8 tons. 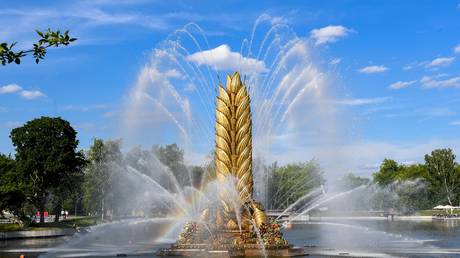