Exports of Russian grain in the first half of June have exceeded the amount sold during all of May, according to shipping data cited by Russian agricultural consultancy SovEcon.

The consultancy expects June grain exports to total 2.7 million tons, including 2.4 million tons of wheat. That will beat the previous record of 2.15 million tons fixed in June 2018, according to the head of SovEcon, Andrey Sizov.

June shipments will top the total sales of Russian grain recorded in the three previous months, said Igor Pavensky, the head of the Rusagrotrans analytical center, as quoted by Russian business daily Kommersant.

The uptick reportedly comes as a result of the latest reduction of tax on wheat exports. Moscow introduced a permanent floating tax instead of the previous duty of €50 per ton.

The floating tax was imposed on wheat, corn and barley, and involves a mechanism by which sellers are required to register their export contracts on the Moscow Exchange. The new scheme reportedly minimizes the negative impact of price fluctuations seen in the global markets on the Russian agricultural sector and consumer prices.

According to the Russian Ministry of Agriculture, the country has exported 46 million tons of grain, including 35.5 million tons of wheat this year. The data doesn’t cover shipments to countries of the Eurasian Economic Union (EAEU). 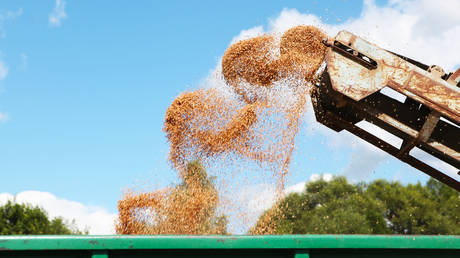