Republican senators in the US have fired a barrage of criticism over a new State Department report that faied to include new entities as targets for sanctions over their participation in the Nord Stream 2 gas pipeline project.

“The Biden administration is signaling it is willing to let the pipeline be completed with catastrophic implications for American national security and for the energy security of our European allies,” Texas Senator Ted Cruz, a member of the Senate Foreign Relations Committee, said in a statement.

The report to Congress named two enterprises previously sanctioned by the Trump administration — the Russian pipe-laying ship ‘Fortuna’ and its owner KVT-RUS, the WSJ reports. The document also includes 18 firms that had already left or were leaving the project.

The criticism was reportedly backed by Idaho Senator Jim Risch, the top Republican on the Senate Foreign Relations Committee, who said the report was misleading.

“Maritime tracking information makes it clear that ships not covered in today’s report are currently active in supporting Nord Stream 2 construction. The administration’s decision to ignore these activities demands an immediate explanation,” the lawmaker said in a statement.

The Nord Stream 2 pipeline project is currently being completed by Russia’s Gazprom, in cooperation with several European energy majors. The $11-billion pipeline, which is 95-percent completed, is set to double the existing pipeline’s capacity by 55 billion cubic meters of gas per year. Nord Stream 2 will reportedly provide transit for 70 percent of Russian gas sales to Europe.

The project has been bashed by the White House, which is constantly trying to convince Berlin and Brussels that a Russian pipeline would threaten energy security for the entire bloc. At the same time, such EU members as Poland, Latvia, Lithuania, Romania, and Hungary have persistently expressed their disapproval of Nord Stream 2.

The day before Joe Biden’s inauguration and for the first time in four years of Trump’s administration, the outgoing US government moved beyond the rhetoric and applied sanctions against those participating in the project. The sanction list included the pipe-laying ship ‘Fortuna’ along with its owner KVT-RUS, the crewing company Rustanker, as well as the oil tankers ‘Maksim Gorky’ and ‘Sierra.’

Biden had  previously opposed the project, but it remains unclear whether he’ll follow President Donald Trump’s hard line on the issue, as the current US President hasn’t yet offered a detailed policy on the pipeline. 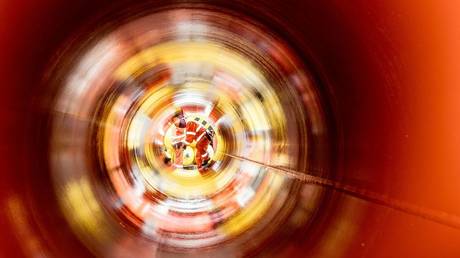