Amazon stock’s surge during the coronavirus pandemic is making its boss Jeff Bezos richer every week. He is now closer than ever to the historic title of first person to be worth $200 billion.

Amazon stock gained about 1.2 percent to close at $3,346 per share on Tuesday, and continued to climb higher after hours. The rally pushed Bezos’ fortune higher again – he gained around $2.2 billion from the 11 percent stake he owns, and his net worth now stands at a record $199.7 billion, according to Forbes’ calculations.

Already the richest man on the planet, Bezos has been breaking his own records almost every week in recent months. Last week, he had around $2 billion less in his pocket, but it was still the highest net worth Forbes had seen since it started tracking billionaires around four decades ago.

The coronavirus outbreak has become somewhat of golden age for tech and e-commerce giants, which have profited as people are stuck at home and have to turn to online retailers for deliveries of essentials. Amazon recently presented blowout second-quarter results, showing that the company earned almost $89 billion over that period.

Bezos is not the only billionaire that has seen his fortune skyrocket during the pandemic. According to a recent study by the US’ Institute for Policy Studies (IPS), the 12 top richest Americans – including Bill Gates, Mark Zuckerberg, Warren Buffett, and Elon Musk – have seen their combined wealth jump by 40 percent to reach more than $1 trillion. 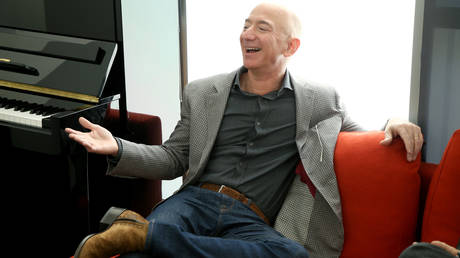 ALL hospitals declared free of Cov...

Exxon gets kicked out of the Dow J...