Most people are planning to avoid travel even after the pandemic subsides due to health risks and economic uncertainties, a recent poll by the International Air Transport Association (IATA) shows.

While some 58 percent of travelers surveyed by the aviation agency in 11 countries said they “have avoided air travel,” some 33 percent are not planning to travel in the near future to avoid catching the deadly virus. Less than half of respondents – 45 percent – indicated that they would return to travel within a few months after the outbreak is contained, much less than the 61 percent of positive responses recorded in April.

While most of those polled are still willing to travel to see family and friends or go on vacation, some 66 percent suggested they would travel less for leisure and business after the Covid-19 restrictions are lifted. Almost the same number of people – 64 percent of poll participants – said they would postpone travel until economic factors improved, referring to both personal and global economic conditions.

“This crisis could have a very long shadow. Passengers are telling us that it will take time before they return to their old travel habits,” IATA’s Director General and CEO, Alexandre de Juniac, said in a statement.

Cabin air quality is one of the top three concerns of travelers when they board an aircraft, while sitting next to someone who might be infected and using restrooms are also on the list. The agency noted that the fear could be exaggerated given that the quality of air in modern jets is actually better than in most places, as the cabin is exchanged with fresh air every two to three minutes compared with two to three times per hour in office buildings.

While at the airport, travelers also feel nervous about being on crowded transport on the way to the plane, waiting in a queue and using public restrooms. To feel safer, passengers are ready to undergo screening at departure airports or take a coronavirus test prior to travel, while others agree with mandatory wearing of masks and social distancing measures on the aircraft.

Many airlines and airports earlier noted that they do not expect the demand to return to pre-crisis levels until 2023 or 2024. According to a United Nations forecast, global tourism revenues may drop between $1.2 trillion and $3.3 trillion depending on how long international travel remains halted. 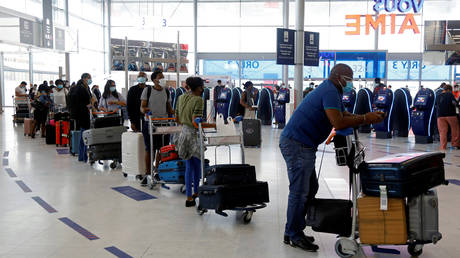