No quick bounce back: Russia’s real GDP to recover in mid-2022 but ruble to remain strong, Economy Ministry says

No quick bounce back: Russia’s real GDP to recover in mid-2022 but ruble to remain strong, Economy Ministry says

Russia’s Ministry of Economic Development has released a fresh forecast for 2019-2022. The ministry said there will be no V-shaped recovery: after a five percent plunge in 2020, real GDP will only recover starting in mid-2022.

The Ministry of Economic Development predicts a GDP growth of 2.8% in 2021 and three percent in 2022.

The Urals price remains below the base budget price of $42, at which point the Russian budget breaks even. Urals will average $31.1 per barrel this year, rising to $35.4 in 2021. Only in 2022 will it return to the breakeven price of $42.2 when Russia Inc. goes back into profit.

That means the Ministry of Finance will rely on the National Welfare Fund (NWF) to top up budget spending until 2023. Currently there are some nine trillion rubles ($130bn) of liquid assets in the NWF. With an estimated three-trillion-ruble shortfall in budget revenues forecast for this year, there is therefore enough in the NWF to cover at least another three years of deficits.

The ministry also says the ruble will remain relatively strong over the period. The ruble was trading at an average rate of 64.7 rubles to the dollar in 2019 before the start of the oil price shock and the corona crisis, but it sank to a low of 80 rubles amid the panic that followed. It has since recovered to break below 70 rubles again in the first weeks of June.

The fall in oil prices will also put pressure on the balance of payments, but those will remain positive throughout. Russia ran a $65 billion trade surplus in 2019 that will fall to a mere nine billion this year, before recovering very slowly to $10 billion and $27 billion over the next two years.

The current account is also expected to halve this year to $45 billion but the Ministry of Economic Development offered no forecast on this number. Opinion is divided amongst analysts on what will happen to the current account. The Central Bank of Russia (CBR) said last month that the current account may go negative for the first time in a decade this year after oil prices fell to around $25; more recently, however, analysts at BCS Global Markets predicted that Russia will earn $45 billion this year, after oil prices recovered surprisingly quickly.

Among the other predictions, the Ministry of Economic Development estimates that inflation at the end of the year will go from three percent in 2019 to four percent this year and stay at that level for the next two years – at the CBR’s target rate. 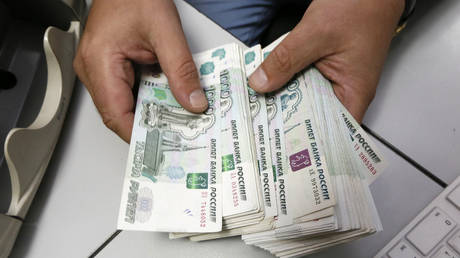 E-commerce may be the driver for e...