Madrid’s regional authorities seek to challenge the Spanish government’s decision to impose new curbs to contain the spread of Covid-19, saying the measures will cost the region’s population dearly.

According to the regional government’s appeal against the recently imposed coronavirus restrictions, filed on Friday, the measures could wipe out €750 million ($880 million) in revenue and 18,000 jobs each week. The lawsuit adds that slow economic activity will also significantly decrease tax revenue.

The Spanish capital, as well as some nearby cities, entered partial lockdown on Friday evening in compliance with the central government’s order aimed at containing the spread of the deadly virus amid worsening figures. Starting this weekend, around 4.5 million people impacted by the new measures cannot leave their city or town except for essential activities such as going to work or school. The order also limits the size of social gatherings. Bars and restaurants will be able to operate only at 50 percent capacity and cannot serve after 10pm.

Unlike the majority of regions, which do not fall under the restriction criteria of a certain number of cases per 100,000 people, the Madrid region resisted the proposed curbs when they were discussed earlier this week. When the plan was finally adopted despite Madrid’s objections, the region’s conservative-led government denounced it as “not legally enforceable.” While the region eventually agreed to comply with the order, it refused to sit idle, vowing to challenge the measures in court.

“This region is not rebelling. We will obey, but we will go to the courts to defend the legitimate interests of Madrilenos and ensure that the measures are adjusted to regulation, to reality, and that they are objective and fair,” regional chief Isabel Diaz Ayuso said earlier this week.

Sprain is one of the top 10 countries in terms of number of cases. According to data from Johns Hopkins University, the Covid-19 outbreak has killed over 32,000 people and nearly 790,000 people have been infected in the country. 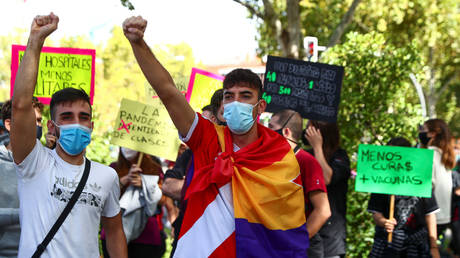