Russian gas producer Novatek has announced plans to ship 80 percent of the liquefied natural gas (LNG) from its Arctic LNG 2 plant to Asian markets via the Northern Sea Route.

According to the head of Novatek Leonid Mikhelson, “The plant’s three liquefaction lines with a total capacity of 19.8 million tons of LNG will be launched starting in 2023.”

LNG supplies to Asia will become possible due to the year-round navigation of ships along the Northern Sea Route (NSR), he told participants of the LNG Producer – Consumer Conference in a video message.

Mikhelson added that after the commissioning of the new nuclear-powered icebreakers LK-60, it will be possible to use all the routes of the NSR year-round. “The lead icebreaker Arktika is completing tests and will be commissioned next month,” he said.

Arctic LNG 2 is Novatek’s second liquefied natural gas project at the Gydan Peninsula in Russia’s Yamalo-Nenets Region. Besides Novatek, Chinese CNOOC and CNPC, France’s Total and a consortium of Japan’s Mitsui and Jogmec have a 10 percent share each in the project. Last month, Germany said it may participate in the project with investments of up to €300 million ($354 million).

Russia wants to turn the Northern Sea Route, which stretches the entire length of Russia’s Arctic and Far East regions, into a major trade artery between Europe and Asia. In the first half of the year, freight transportation via the route reached almost 15 million tons. Last year, 31.5 million tons were transported using the Arctic route. 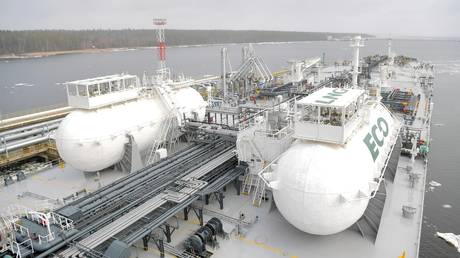