Libya’s National Oil Corporation (NOC) has announced it is ending force majeure on the Sharara oilfield, the nation’s largest deposit, marking another milestone for the recovery of the country’s oil production.

In a statement released on Sunday, the NOC said it has instructed the operator of the southwestern field, Acacus, to start production arrangements, taking into consideration public safety and process safety standards.

The corporation which operates Libya’s energy sector said that the move follows an agreement with the Petroleum Facilities Guard. According to the NOC, the group pledged to ensure that there would be no “security breaches.”

The NOC’s announcement comes more than three weeks after Field Marshal Khalifa Haftar said he would lift the blockade on fields and ports following a deal with the Tripoli-based, UN-backed Government of National Accord (GNA). The NOC lifted the force majeure on the oil terminals and restarted production from certain fields it considered “safe” shortly after the agreement was reached, but some major facilities, such as the Sharara oilfield, remained offline.

Since the blockade was lifted and production partly resumed, Libya’s crude output has reportedly hit nearly 300,000 barrels a day. Sharara could add another 300,000 barrels to the nation’s daily crude output once it is restored to full capacity. The NOC previously ended force majeure on the deposit in early June, but it was closed again shortly thereafter.

The war-torn country sits on the biggest oil reserves in Africa, and can pump out around 1.2 billion barrels a day. While ramping up oil exports will ease the strain on the Libyan economy, with lost nearly $10 billion in revenue due the energy infrastructure blockade, the extra supply may become another problem for the global oil market.

Oil prices tumbled this year as demand fell due to the Covid-19 outbreak. In an attempt to boost prices, the Organization of the Petroleum Exporting Countries (OPEC) and its allies led by Russia (together known as OPEC+), cut production in May, and the curbs are still in place. 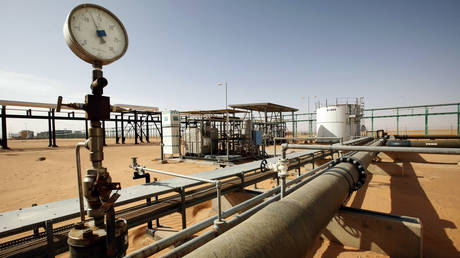