Other Asian markets, except for Taiwan and Australia, were trading up, with shares in both mainland China and Hong Kong gaining around 1.5 percent. South Korea’s Kospi was up 0.4 percent, and India’s Mumbai Sensex added around one percent.

The markets reacted to media reports that Japanese Prime Minister Abe has resigned. Japan’s public broadcaster NHK, citing sources close to Abe, said that the 65-year-old leader is stepping down due to a worsening of a chronic health condition. The same was reported by a number of other outlets.

“This is a negative for Japanese stocks because it raises questions about what policies come next. We do see the familiar pattern of falling stocks pushing up the yen,” said Junichi Ishikawa, senior foreign exchange strategist at IG Securities in Tokyo, as cited by Reuters.

The change in the global markets sentiment also came after a major US policy shift. Federal Reserve Chairman Jerome Powell announced a revised policy to target inflation on Thursday.

“Following periods when inflation has been running persistently below 2 percent, appropriate monetary policy will likely aim to achieve inflation moderately above 2 percent for some time,” the Fed said. 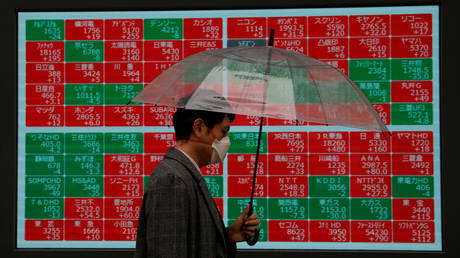