The Islamic State has called on its members to start targeting Saudi Arabia oil infrastructure as punishment for the Kingdom warming up to Israel.

“Targets are plenty…Start by hitting and destroying oil pipelines, factories, and facilities which are the source (of income) of the tyrant government,” a spokesman for the terrorist group said in a recorded message cited by Reuters.

Saudi Arabia opened its air space for flights between Israel and several neighbors in a historic move for the Middle East. According to the statement of Islamic State, that was enough to turn the Kingdom into a target of the group’s attention.

Saudi Arabia has been the target of Islamic State attacks in the past as well, although never on a scale comparable to what the terrorist group did in Syria and Iraq. Now, it is taking part in the Israeli-Palestine saga, calling for a lasting and sustainable peace between the two.

The UAE and Bahrain, both allies of Riyadh, recently established formal diplomatic ties with the state of Israel in a pair of deals brokered by the US administration. The moves, praised by Washington and Jerusalem alike, drew criticism from the Palestinians, for whom a deal between fellow Arab states and the ultimate enemy must have been a hard blow.

Until the two deals, the unified Arab position on Israeli-Palestine relations was that bilateral relations between each Arab state and Israel will only begin once Palestine becomes an independent state. As a result, the Palestinian government has cut off ties with Washington. Saudi Arabia still follows this stance.

Following the signing of Bahrain’s deal with Israel last week, the Islamic State condemned the move, accusing the UAE, Bahrain, and Saudi Arabia of demonstrating “subservience to crusaders,” the Associated Press reported.

READ MORE: Why Saudi Arabia may be forced to start another oil price war

“Here now, the Jews have come to you and are walking freely in your streets and countries, feeling safe and secure with approval from your tyrants and supported by your edicts,” the spokesman of the group, Abu Hamza al-Qurayshi. The recording with the calls to target Saudi Arabia targets came soon after. 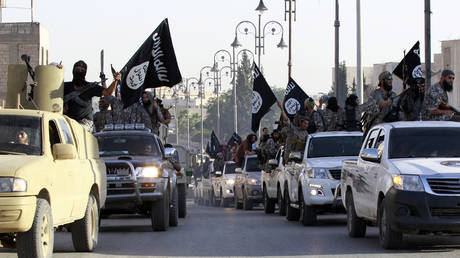