Tehran’s plan to connect Iraq, Jordan, and several GCC states including Saudi Arabia to its grid could be a powerful move to expand its influence in the entire region.

It is no coincidence that just over a month after Israel and the United Arab Emirates declared that they would normalise relations and Israel and Bahrain did the same, Iraq has announced that it has signed a contract with Jordan to connect the electric power grids of the two countries. By extension, this will provide a direct link between Jordan and Iraq’s key regional sponsor, Iran, which recently signed a two-year deal with Iraq to supply it with electricity, the longest such deal signed between the two countries. The last piece of this game-changing regional networking operation is that just before the announcement of the Iraq-Jordan network deal, Jordan also announced that it had signed a memorandum of understanding with Saudi Arabia to lay out the framework of joint cooperation to connect the electric power grids of these two countries.

To begin at the source of this new regional networking plan, Iran’s landmark two-year deal to continue to supply vital electricity to Iraq (both directly from the grid and indirectly via gas supplies that are used in power plants) was regarded by both countries as being important enough to their broader regional strategy to risk being further sanctioned by the US, which is precisely what happened. With Iranian energy accounting for between 30 and 40 percent of the electricity consumed in Iraq, depending on the season, the US had been pushing Iraq towards committing to reducing these imports from its neighbour prior to the visit of Iraq’s Prime Minister, Mustafa al-Kadhimi, to Washington, in August. As an inducement to this effect, US companies Chevron, General Electric, Honeywell International, Baker Hughes, and Stellar Energy, signed agreements with the Iraqi government for deals aimed at boosting Iraq’s energy independence from Iran, worth at least $8 billion, and the White House granted a 120-day waiver for Iraq to continue to import Iranian energy as a stop-gap measure. For three key reasons – exclusively highlighted by OilPrice.com recently – the US has already become disillusioned that the promises al-Kadhimi made whilst in Washington will be kept and consequently slashed the latest waiver length to half the previous number.

It is also clear to the US now that the Iraq-sponsored push to build a regional energy grid across the Middle East was not an effort to reduce Baghdad’s dependence on Iran but in reality to expand Tehran’s regional influence further. “Prior to the meetings between al-Kadhimi and various senior officials in Washington in August, there were various comments from White House officials along the lines of ‘we’re very pleased to see Iraq pushing for a regional energy network – including links across the GCC states [Bahrain, Kuwait, Oman, Qatar, Saudi Arabia, and the United Arab Emirates] – as this will reduce Iraq’s dependence on Iran and help bring Iraq into the US sphere of influence, currently centred around Saudi Arabia’,” a senior oil and gas industry source who works closely with Iran’s Petroleum Ministry exclusively told OilPrice.com last week. “But they’ve got it the wrong way around: it’s Iran who is pushing Iraq into this to bring the same states, including Saudi, out of the US sphere of influence,” he said.

In this context, just a month or so before al-Kadhimi’s visit to Washington, Iran’s Energy Minister, Reza Ardakanian, clearly stated that Iran and Iraq’s power grids have become fully synchronised to provide electricity to both countries by dint of the new Amarah-Karkheh 400-KV transmission line stretching over 73 kilometres, which also ‘paves the way for increasing energy exports to Iraq in the near future, from the current 1,361 megawatts per day now.’ He added that Iranian and Iraqi dispatching centres were now fully connected in Baghdad, the power grids were seamlessly interlinked, and that Iran has signed a three-year co-operation agreement with Iraq ‘to help the country’s power industry in different aspects’. At the same time, it was announced by the Iranian Electrical Power Equipment Manufacturing and Provision Company that Iran’s electricity exports to other neighbouring countries in the previous Iranian calendar year (ended on 19 March 2020) reached over 8 billion kilowatt-hours (kWh), a mean average increase of 27.6 percent year-on-year. So far, the countries receiving power from Iran’s grid are: Armenia, Azerbaijan, Pakistan, Afghanistan, and the Nakhchivan Autonomous Republic, plus, of course, Iraq (which saw an increase of 34.6 per cent from the preceding year). This network does not include the parallel network connections that Iran is consolidating in terms both of direct electricity and gas exchanges, which further includes Turkmenistan and Turkey.

Having spent years laying this groundwork for a pan-regional energy network with Iran at its centre, Tehran’s first suggested target for Iraq was Jordan, as it is not particularly seen as a ready ally of Iran, although it has been exceptionally accommodating to Iraqi requests for increased co-operation in recent months. In July, for example, Jordan’s Energy Minister, Hala Zawati, announced that the Kingdom would resume crude oil imports from Iraq, beginning with at least 10,000 barrels per day (bpd) of Iraq crude oil via tankers. This, though, was just part of the deal struck earlier his year between the two countries that envisaged much wider co-operation that will tie Jordan more closely in with Iran.

The key initiative in this context is the construction of an oil (and potentially gas as well) pipeline between the two countries, with the original idea being for a Basra-Aqaba route spanning around 1,700 km. December 2019 saw an announcement from Iraq’s Oil Ministry that it had completed the prequalifying process for companies interested in participating in the pipeline project, with the first phase of the project including the installation of a 700-km pipeline with a capacity of 2.25 million barrels within the Iraqi territories. The second phase includes the installation of a 900-km pipeline in Jordan between Haditha and Aqaba, with a capacity of one million barrels. For Iran, this allows another alternate Iraq/Iran oil export line to the historically vulnerable Strait of Hormuz route, to add to the current plans for the Guriyeh-Jask pipeline and plans to roll out a pipeline to Syria as well. It will also provide another ‘cover’ route for Iranian oil disguised as Iraqi oil, which can then be shipped easily both West and East.

Specifically, then, under the electricity deal just signed between Iraq and Jordan, the Kingdom will provide Iraq with 1,000 gigawatt (GW) hours per year in the first phase of the project, after the completion of the electricity linkage project that will take around 26 months. This will be followed by a second phase that allows for the two sides to further increase the power exchange capacity. Jordan’s Zawati highlighted that the project will enhance the stability and reliability of electricity networks in both countries, as well as adding impetus to the creation of a joint power market in the Arab world. This, Hawati added, should include Saudi Arabia, with which Jordan had just signed a similar agreement to connect the two countries’ electric power grids.

Given the exclusive OilPrice.com report on the third phase of the China-Iran 25-year deal – which encompasses the integration of China’s mass-surveillance and monitoring technology into Iran, which will, in turn, feed into Iraq – news from the Saudi Energy Minister, Prince Abdulaziz, that Jordan and Saudi Arabia have launched the interconnection project accompanied by the establishment of an optical fibre line, which links the two countries’ telecommunication networks, will also be welcome to Beijing. In July, Chinese State Councillor and Foreign Minister, Wang Yi, stated that China attaches great importance to the China-Jordan strategic partnership and the unique role that Jordan plays in international and regional affairs, whilst China – through Guangdong Yudean Group – is a key financier ($1.6 billion so far) and partner in Jordan’s vital Attarat Power Plant shale oil-fuelled power plant currently under construction. 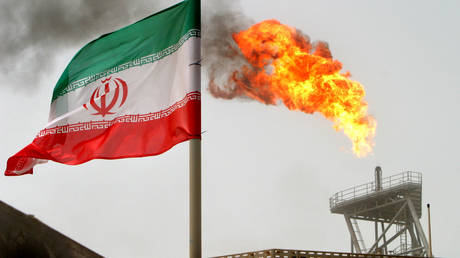