Regardless of the outcome of the JCPOA talks, Iran is looking to boost the rate of recovery at its huge West Karoun oil cluster.

Irrespective of how quickly a new iteration of the Joint Comprehensive Plan of Action (JCPOA) – ‘nuclear deal’ – is signed between Iran and the US, plus the remainder of the P5+1 group of nations that agreed the original version (the UK, France, Russia, China plus Germany), Tehran is now looking to increase its oil output from all of the fields that constitute its massive West Karoun cluster.

With over 67 billion barrels of oil in place across the West Karoun oil fields, the Petroleum Ministry says that each one percent improvement in the rate of recovery would increase recoverable reserves by 670 million barrels or some $33 billion in revenues even with oil at $50 a barrel. This output expansion drive includes some of the fields that are less well known than the supergiant West Karoun sites of Azadegan (North and South), Yaran (North and South), and Yadavaran, but which nonetheless may together substantially contribute to the addition of at least another one million barrels per day (bpd) of crude oil output for Iran within a very short time.

One such a field is Darquain (or ‘Darkhoein’), located 45 kilometres north of the city of Khorramshahr and 100 kilometres south of the oil-rich city of Ahvaz, in the Khuzestan Province. With an estimated minimum five billion barrels of oil in place, 1.3 billion barrels of which are deemed recoverable, the field was initially developed by Italy’s ENI based on its successful 2001 buyback contract tender, together with local partner Naftiran Intertrade. Production of the light oil (API gravity of 39) began in 2005, with Darquin-1, and the Darquain-2 development followed in early 2011. Both of these have been focused on the exploitation of the easier-to-excavate parts of the Fahlyan reservoir formation, with the resultant oil flows being delivered into the Ahvaz-Abadan oil pipeline.

The next phase of development will focus on developing the more challenging parts of the Fahlyan layer by dint of gas injection, plus opening up the Ilam and Sarvak reservoirs, with the latter of these also being subject to water and gas injection enhanced recovery techniques. To further optimise the recovery rate across these layers in Phase 3, there will be a rollout of another 31 oil wells, six gas injection wells, crude oil processing facilities including pipelines, processing installations, gas compressors, crude oil storage tanks and roads. After this development program has been completed, crude oil output from the Darquain site will total at minimum 220,000 bpd, a senior oil sector source who works closely with Iran’s Petroleum Ministry exclusively told OilPrice.com last week.

To roll out Phase 3 in full, together with concomitant enhancements to existing operations at Darquain, will require investment of around $1.5 billion but both China and Russia have already made it clear to Iran that they will cover any costs associated with the exploration and development of the West Karoun oil fields. Prior to the re-imposition of US sanctions on Iran in May 2018, the contract for Darquain had been one of the $30 billion of ‘strategic’ energy deals agreed by Iran with Russia during President Vladimir Putin’s visit to Tehran in November 2017. These were to involve the state-owned Russian heavyweights Rosneft (oil) and Gazprom (gas), according to the Iran source. Subsequent to signing of the landmark 25-year deal signed with China in 2019, though, Russia agreed to make way for China to take the lead in West Karoun, as part of the division of key Iranian oil and gas assets between the two powers.

China for its part in the 25-year deal that focused on oil and gas development committed to increasing the then-355,000 bpd output from the West Karoun oil fields cluster by another 145,000 bpd in the first phase (to 500,000 bpd) and then by another 500,000 bpd (to 1 million bpd) within two years from 2019, although this was pushed back due to the outbreak of the COVID-19 pandemic. It also committed to supporting the parallel development of the fields Iran shares with Iraq, however difficult, with the two countries sharing eight major oil field sites along their joint border, with combined recoverable crude oil reserves of a very conservatively estimated 14 billion barrels.

A key concern for Iran (and conversely, for Iraq, and with more justification) has long been that its neighbour would develop its side of the shared fields in a manner geared towards expedience rather than sustainability of the oil reservoir, thus damaging Iran’s eventual oil yields from the shared sites. Notable amongst these shared fields are Dehloran (Iran side, Abu Ghurab Iraq side), Naft-Shahr (Khorramshahr), Azadegan (Majnoon), Naft Shahr (Khorramshahr), and Yadavaran (Sinbad) but, again, there are smaller fields as well, although these frequently have much bigger potential gas deposits present. In all cases, however, Iran has a guaranteed buyer for all oil and gas it produces at any and all of its sites as part of China’s purchasing commitments in the 25-year deal.

A prime example of such a field is Arvand, located around 50 kilometres south of Abadan in Khuzestan Province, at the strategically important entrance of the Arvandroud River. More widely known as the Shatt al-Arab waterway, this river lies at the confluence of the Euphrates and the Tigris and at its southern end constitutes the border between Iran and Iraq before its runs down into the Persian Gulf. The Arvand oil and gas site itself is estimated to contain one billion barrels of oil in place with a recovery rate of 15% even under current circumstances in which ongoing sanctions-related restrictions have kept the average rate of recovery across Iran’s oil fields at between 4.5-5.5%. Arvand also holds over 14 billion cubic metres (bcm) of dry gas and 55 million barrels of gas condensate. In broader terms as well, Arvand’s importance is bolstered further by the fact that it is crucial in determining the wider hydrocarbons potential of the formations in the Khami and Bangestan oil and gas areas. Currently administered by the Arvandan Oil and Gas Production Company – the crude oil production of which (from these ‘smaller fields’ for which it is responsible) is estimated will reach 1.4 million bpd by 2025 – the Arvand field is currently the subject of negotiation with various Chinese and Russian oil and gas firms, in line with the two countries’ landmark agreements with Iran. 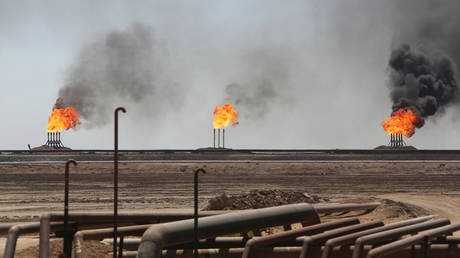