The world’s fifth-largest economy, India, is expected to contract by 16.5 percent during the quarter covering April to June of the current fiscal year, according to a research report by the State Bank of India (SBI).

The decline is less than the contraction of over 20 percent projected by the bank in May, “though with the relevant caveats in the current uncertain scenario,” SBI economists said.

The report said that de-growth in corporate gross value added has been significantly better than revenue de-growth in Q1 FY21 as far as the results of the listed companies are concerned. So far, around 1,000 listed entities have announced their results for the first quarter. The results showed a decline in revenues of more than 25 percent, and a drop in profits of over 55 percent.

However, the decline in corporate gross value added was only 14.1 percent. “In principle, revenue decline of listed companies has been far outstripped by cost rationalization, thereby not impacting margins.”

“These districts contribute mostly around 2-4 percent of GSDP (gross state domestic product) of their respective states, indicating that cases are penetrating deep rural hinterlands,” it said.

With a total of 51,955 coronavirus deaths, India has the third-highest tally in the world, behind the US and Brazil. The nation has recorded 2.7 million infections, with nearly half of the cases registered this month alone, Health Ministry data showed. 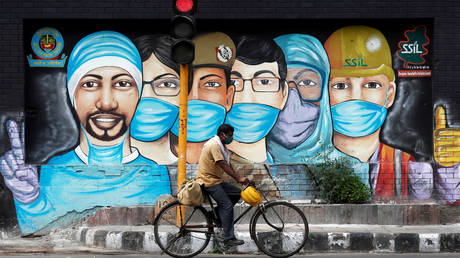