Asia’s third-largest economy may have contracted by 25 percent in the first quarter of the current fiscal year, local media has said, citing rating agency ICRA’s assessment of the devastating consequences of Covid-19.

Both India’s gross domestic product (GDP) and the gross value added (GVA) could have fallen in the April-June period, according to ICRA. Unlike in most countries, the Indian fiscal year (FY) starts from April 1, so the three months through to June are defined as the first quarter.

The rating agency said the drop came as major production sub-sectors were paralyzed amid the nationwide lockdowns and suffered huge losses. A 40-percent year-on-year decline was reportedly recorded in manufacturing volumes, while economic activity was also significantly down in such spheres as construction, trade, hotels and transport, among others.

The analysts also noted that the restrictions on travel, tourism and hospitality linked to the pandemic adversely impacted the service sector’s performance over the same period.

“Our assessment draws from the available data for volumes and profitability for the industrial and services sectors, the expectation of distress in the MSME and the relatively informal sectors, as well as the favorable rabi harvest and government revenue spending,” said ICRA’s Principal Economist Aditi Nayar.

Last month, the agency sharply revised its forecast for the contraction in Indian GDP for this fiscal year, expecting a 9.5 percent drop against the five percent predicted earlier. The downward revision came due to the rising number of coronavirus infections, which triggered the re-imposition of localized lockdowns in several states.

The coronavirus outbreak may undermine India’s progress in poverty reduction and push millions of people into it, the World Bank warned last week. The body is also set to revise its outlook for the country, as it expects a steeper contraction in India’s GDP than the 3.2 percent it had previously predicted. 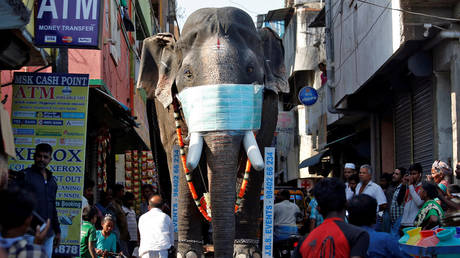 With markets addicted to QE, c...