US e-commerce behemoth Amazon could face a new regulatory challenge in India as a group representing over 2,000 vendors has filed a lawsuit claiming the retailer’s mistreatment may drive some sellers out of business.

In a claim filed to the Competition Commission of India (CCI) earlier this month, the All India Online Vendors Association accused Amazon of unfair business practices. In the legal filing, seen by Reuters, the group claims that Amazon India’s wholesale arm purchases massive volumes of goods directly from manufacturers and then sells them at a loss to companies it favors. Those firms then sell the products on Amazon marketplace in India at discounts of up to 45 percent.

The report named Amazon’s affiliate Cloudtail – the single largest seller on the Amazon India platform – as one of the firms taking advantage of such preferential treatment. According to a 700-page filing, such selected sellers enjoy lower fees when they list their goods on the platform, making it more difficult for independent online retailers to compete. For example, Cloudtail allegedly pays 6.3 percent for electronic products, while independent sellers pay roughly a 28.1 percent fee.

Last year, Cloudtail had to briefly suspend operations to restructure its ownership in order to comply with India’s direct investment policy for e-commerce. According to the Economic Times, Amazon had to half its indirect holding in the online retailer to 24 percent.

“This anti-competitive arrangement … is causing foreclosure of competition by driving independent sellers out of the market,” the group wrote in the legal filing as cited by Reuters. The lawyer of the association confirmed the case filing to the outlet.

The Indian regulatory body is unlikely to make the details of the case public, but is set to decide whether the case should proceed in the coming weeks.

While Amazon is heavily investing in India, the company has already been in hot water over its “predatory” trade practices. In January, India’s anti-trust regulator opened a similar investigation over violation of competition laws by Amazon and its Indian rival, Walmart-owned Flipkar. The US online giant denies the allegations, and said that the probe, that is “bereft of foundation,” would cause “irreparable” losses. 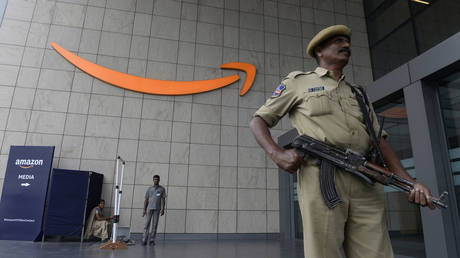