New Delhi had earlier imposed 100 percent physical checks of shipments from China. The new regulations on Chinese imports follow a deadly border clash last month between soldiers from both countries along a disputed border in the Himalayas in which 20 Indian soldiers were killed.

The Commerce and Industry Ministry has reportedly pushed for fast tracking amendments to the customs law to tighten the rules to claim concessional benefits under India’s free trade pacts. It has also requested that the Finance Ministry introduce stringent provisions related to rules of origin, to empower customs officers for checking the abuse of free trade agreements (FTAs).

The government had inserted a new chapter in the Customs Act on the administration of rules of origin under trade agreements, giving it the power to suspend and refuse preferential tariff treatment in case of incomplete information or verification and non-compliance, respectively. Under the new rules, an importer cannot avail of concessional benefits by merely providing a certificate of origin.

“We will scrutinize imports coming from third countries and not clear suspicious consignments… There is complete sync in the government at top levels that unnecessary imports need to be blocked,” an unnamed senior official told the Economic Times.

“The process of notifying the new rules has begun,” said another person familiar with the matter.

“Determining the correct country of origin is not only important for the benefits of FTAs to accrue to the rightful importer, but also trade facilitation, and expeditious clearance of cargo will happen in the current situation depending on the country of origin,” said Bipin Sapra, a partner at advisory firm EY.

The government is already reviewing details on the installed capacities of local industry for goods that India trades under the Asia Pacific Trade Agreement, South Asian Free Trade Area, the ASEAN group, and bilateral pacts with Singapore, Japan, South Korea, and Sri Lanka. 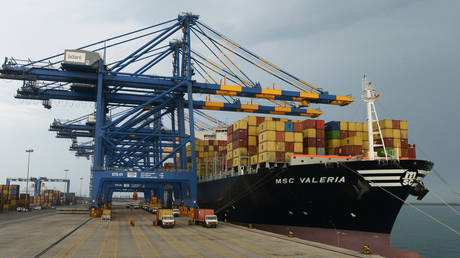 Not important what really happened...