The Indian government is reportedly preparing an incentive scheme to support domestic car makers and components producers to grab a bigger share in the global auto market.

In an attempt to give a “big push” to the key sector crippled by the coronavirus pandemic, the Department of Heavy Industries (DHI) has come up with a five-year stimulus plan, Reuters said citing government sources. The initial proposal is already being reviewed by local industry groups.

“For autos the government has engaged with various stakeholders. We have to see what needs to be done in the global context,” Reuters cited one of the officials as saying.

It is unclear whether the companies will get funds from the government or enjoy tax breaks as the forms of benefit have not been revealed. An official said that one of the proposals suggests giving companies benefits proportionate to the distance between their facility and sales destinations to compensate for higher warehousing and logistics costs, while another said that the measures could target production of specific car models.

Although details of the initiative have not been finalized, it is already understood that the companies will have to meet several conditions to be eligible for the proposed incentives.

The minimum revenue and operating profit thresholds for car manufacturers are expected to be set at 100 billion rupees ($1.3 billion) and 10 billion rupees ($131 million) correspondingly. The target levels for auto part makers are set to be around five times lower. Moreover, the firms should have a presence in several countries outside India and contribute to research.

Some analysts noted that New Delhi should minimize conditions for the auto industry players as the ambitious plan comes amid hard times for most industrial sectors, with demand hit by the coronavirus outbreak.

India became the seventh largest manufacturer of commercial vehicles in 2018 and aims to further expand the sector. However, the pandemic is set to put the expansion plan on halt as the country’s auto exports already nosedived at the beginning of this fiscal year. According to an Engineering Export Promotion Council (EEPC) study cited by the media, the sector suffered a 73-percent decline in exports, falling from $852.3 million in May 2019 to $230.3 million in May 2020. 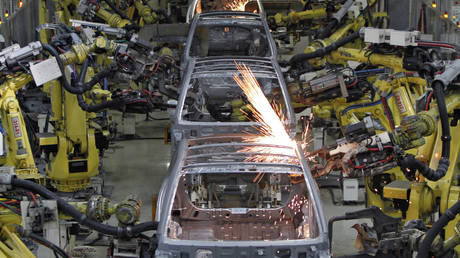 Hundreds of schoolkids to be put i...