The damage caused by powerful storm surges triggered by Hurricane Ida is expected to amount to about $18 billion in insurance payments in the US and the Caribbean, according to catastrophe modeling company Karen Clark & Co.

The figure is close to the lower end of early calculations revealed by insurance experts while the cyclone was still roaring earlier this week, and represents the first estimate from one of the majors in the risk-modeling sector.

According to the firm, some $40 million worth of the insured loss would be in the Caribbean and the rest from wind and storm surge losses in the United States.

Making landfall in Louisiana as a category 4 hurricane on Sunday, Ida brought howling 150mph winds, lashing rain, and up to 16 feet of water surging onto the Gulf Coast and up into New Orleans and beyond.

According to the earlier estimates, insurers were expected to take a hit of up to $30 billion in claims from Hurricane Ida. Moreover, the losses will reportedly surge due to the growing costs of lumber and labor amid the Covid-19 pandemic.

The experts highlight that the wide-ranging estimates are still projected to be far less than the $87 billion in claims from Hurricane Katrina back in 2005.

The forecast covers damage to privately insured residential, commercial, as well as industrial properties and automobiles, excluding boats, offshore properties or losses that come under the US National Flood Insurance Program. 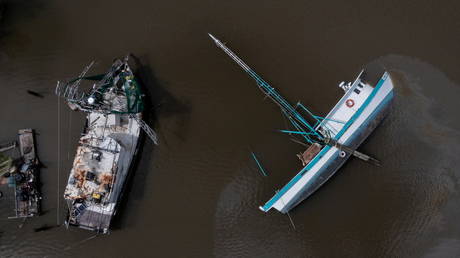