Gulf of Mexico refiners have restarted production following a narrow miss from the devastating hurricane Laura.

Refineries along the Gulf Coast began to restart a day after hurricane Laura made landfall in Louisiana, most of them only suffering minimal or no damage. Motiva and Valero have so far been the only ones to report a problem – a chemical leak that was quickly contained for Motiva and a release of sulfur dioxide for Valero. The refiner said the gas was released during the shutdown of a refinery ahead of Laura’s landfall.

Oil prices immediately fell when it became clear that the likelihood of prolonged refinery disruption was small despite Laura’s unfortunate trajectory and landfall.

Laura made landfall as a Category 4 hurricane in southwestern Louisiana near Cameron in the early hours of August 27, with wind speeds reaching 150 mph and torrential rains drowning the coastal line.

The Texas Railroad Commission has said it was ready to assist refiners with any leaks or spills they might suffer as a result of the hurricane, or any other problems caused by Laura.

Some 16 percent of US refining capacity was shut down ahead of the hurricane’s landfall, Argus Media reported, and Total was already restarting its Port Arthur refinery on Thursday. Motiva, Valero, and Exxon were still assessing the restart of their facilities. Some refineries will take longer to restart, according to the report, because of extensive damage to the electrical grid in western Louisiana by the winds the hurricane brought to the coast.

At the time of writing, BP was the only producer in the Gulf that said they were preparing to restart production. 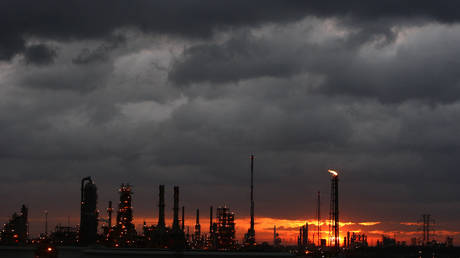