Stocks in Europe and Asia as well as US futures traded higher on Monday as investors bet on positive economic data from China and expect US lawmakers to pass a new stimulus package amid the rising number of Covid-19 cases.

Chinese stocks led Asian markets higher on Monday, with Hong Kong’s Hang Seng marking its best trading day since July 21, as it added more than two percent to close at 24,649.68 points. Shares trading in mainland China were also up, with the Shanghai Composite Index surging over 2.5 percent, and the Shenzhen Composite Index was around three percent higher at the close.

The CSI300 index, which tracks the biggest companies trading on the Shanghai and Shenzhen exchanges, extended last week’s rally on Monday. The index secured its biggest gains in three months, growing around three percent.
The rally comes as Beijing is set to release new export figures later this week, while a quarterly GDP report will be presented as soon as next week. Both reports are expected to reflect the further recovery of the world’s second largest economy, with exports possibly rising over 10 percent and GDP surging more than five percent.

Elsewhere in the Asia-Pacific, Australia All Ordinaries and South Korea’s Kospi indices closed around a half percent higher. Japan’s Nikkei bucked the trend, slipping 0.3 percent.

Most European exchanges followed their Asian peers to open higher on Monday. The pan-European STOXX 600 jumped 0.2 percent higher in early trading. German and French stock markets gained less than one percent, while British shares were trading flat ahead of a Brexit summit later in the week.

“From a virus perspective as well, we’re seeing concerns in Europe, while China is considered a quasi-safe haven,” Chris Weston, head of research brokerage Pepperstone in Melbourne, said as cited by Reuters.

Meanwhile, US stock futures were mostly higher in pre-market trading, with the tech-heavy Nasdaq rising over one percent and the S&P up around 0.3 percent. While investors are waiting for major Wall Street banks to release their earnings reports later in the week, US lawmakers’ debate on new stimulus measures are also in the spotlight. Over the weekend, Democrats in the House and Republicans in the Senate dismissed President Donald Trump’s $1.8 trillion coronavirus stimulus plan, raising concerns over whether the package will be adopted before the election. 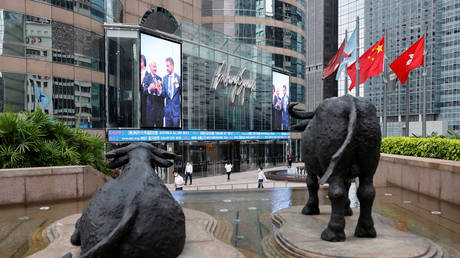 Energy row with Greece escalates a...

Number of coronavirus patients in...