After seven months of consecutive growth, food prices finally reached a three-year peak for the whole pandemic year, according to the UN food security agency, the Food and Agriculture Organization (FAO).

The UN’s benchmark index, which tracks changes in international prices of a basket of food commodities, rose over two percent in December to 107.5 points. The increase was led by the rising prices of vegetable oil, which saw the biggest advance in eight years, and dairy products, followed by that of meat and cereals.

According to the FAO’s estimates, sugar prices were the only ones to retreat last month, but the sub-index was still up over one percent for 2020 compared to the pre-pandemic year.

Despite a sharp increase at the end of 2020, for the whole year the UN gauge of food prices averaged 97.9 points. That’s over three percent more than a year ago and the highest level since 2017. However, last year’s results are still far from the crisis seen around a decade ago, when the index reached its historical peak of nearly 132 points.

Some of the hikes were driven by higher global import demand induced by concerns over drier and warmer weather conditions, according to the FAO. That’s the case for dairy products, for example. However, import quotas and tightening supplies among major exporters amid the pandemic also boosted food price inflation.

“We do at this point see more factors pushing up global food prices,” Bloomberg quoted as saying senior economist at the FAO, Abdolreza Abbassian. “Food inflation is a reality. While people have lost income, they are as we speak going through a tremendously difficult hardship.”

The analyst earlier said that a sharp rebound in agricultural commodities may become a “recipe for unrest” in more vulnerable countries. 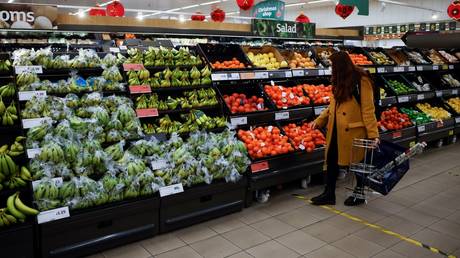 US stock market bubble may pop...

India to overtake China as wor...