‘Get out now or risk the consequences’: US threatens investors in Russian energy projects

‘Get out now or risk the consequences’: US threatens investors in Russian energy projects

Speaking at a news conference on Wednesday, Pompeo said that the State Department is set to update “CAATSA [Countering America’s Adversaries Through Sanctions Act] to include the Nord Stream 2 and the second line of Turkstream 2” pipelines. The move is set to put any investments in those projects at risk of sanctions.

“It’s a clear warning to companies that aiding and abetting Russian malign influence projects will not be tolerated. Get out now or risk the consequences,” he warned.

The threat comes as the Nord Stream 2 pipeline in the Baltic Sea nears completion, with ships able to lay the final kilometer of the pipeline already spotted in the area. Earlier this month, the Danish energy regulator allowed the operator of the project – Nord Stream 2 AG – to use ships with anchor positioning, expanding earlier rules that allowed it to use only vessels equipped with a dynamic positioning system. The construction can be resumed next month, after the time to appeal the decision expires.

The project, set to boost Russian gas supplies to Europe, stalled at the end of last year after a similar US sanctions threat. Back then, Swiss-Dutch pipelaying firm Allseas withdrew its vessels from the area, forcing Russia to finish the remaining part on its own.

Russia and Germany, both of which heavily invested in the project along with other European nations, have repeatedly criticized the US for interfering with the project. In June, Berlin said that new sanctions against the project will amount to “a serious interference in European energy security and EU sovereignty.”

The other Russian energy project mentioned by Pompeo, TurkStream, was officially launched in January. The two-string natural gas pipeline has the total capacity of 31.5 billion cubic meters, with one line supplying Turkey and the other – the one that could fall under US restrictions – transferring gas to southern and southeastern Europe. 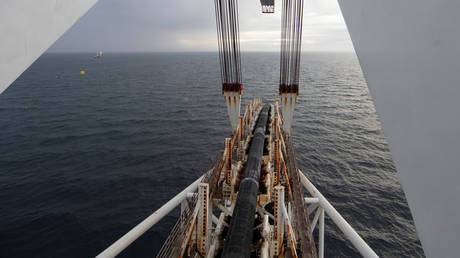 Sony doubling production of PS5 to...