A German toy manufacturer has introduced a teddy bear created in tribute to Angela Merkel’s time in office as the chancellor steps down at the end of this year after serving 16 years as the head of Germany’s government.

Hermann-Spielwaren, located in the Bavarian city of Coburg, revealed the 40-centimeter tall toy bearing a certain resemblance to the chancellor.

The teddy bear is sporting a hairstyle similar to Frau Merkel, while the paws can be folded to replicate the legendary hand gesture known as the ‘Merkel rhombus’.

“We try to express moments of contemporary history in teddy bears as a form of art,” said Martin Hermann, the managing director of one of the world’s oldest still-existing teddy bear factories, as quoted by Germany’s Bild newspaper.

Among the other outstanding figures who have appeared as teddy bears are former US President Barack Obama, former Chancellor of Germany Helmut Schmidt and Britain’s Queen Elizabeth II.

The 101-year-old family enterprise will produce 500 limited-edition Merkel teddy bears, priced at €189 with the 16th one to be sent to Merkel as a reference to the number of years she spent at the helm of Germany. 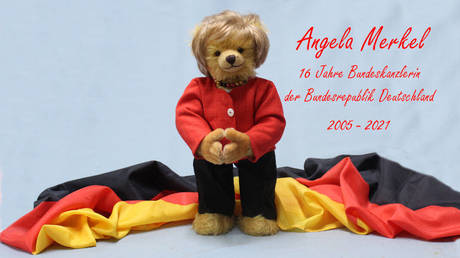 India plans to reopen for internat...

Keeping it in the family: Brazilia...