Germany’s pig farmers are sounding the alarm over a lack of government aid, saying that the very “existence” of the industry depends on it, after the coronavirus crisis and cases of swine fever slashed pork sales.

Measures to contain the coronavirus outbreak alone have cost the industry some 1.3 billion euros ($1.5 billion), according to figures from the national pig farmers association (ISN), based on market prices. The group said that German farmers lost about 60 euros ($71) per animal since March.

Managing director ISN, Torsten Staack, stressed that the industry needs support measures similar to those for the restaurant businesses. While the prices are still at multi-month lows, farmers are unlikely to cope with the crisis without government aid, he stressed.

“If politicians do not act now…many family businesses will have to give up their pig farming,” Staack said in a statement. He added this would have “far-reaching consequences” for entire regions in the country and could threaten domestic pork supplies.

The German agriculture sector has been hit hard as the coronavirus restrictions not only cut the number of orders from restaurants, but also forced slaughterhouses to work at reduced capacity. This led to a pig backlog on German farms, with the surplus feared to exceed one million by the end of the year.

China’s ban on German imports has become another blow to the agriculture sector. The restrictions from the world’s top pork consumer were imposed in September, shortly after African swine fever was confirmed in a wild boar in Germany. 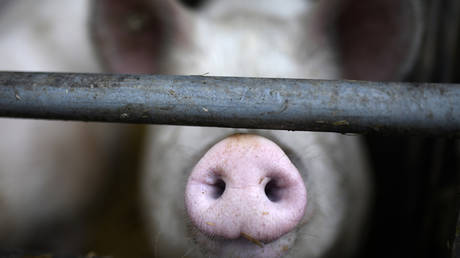