France urges Airbus to fire ‘as few’ workers as possible as 15,000 cuts loom

France urges Airbus to fire ‘as few’ workers as possible as 15,000 cuts loom

The French government, which owns a stake in European aviation giant Airbus, wants the company to minimize forced layoffs after it announced plans to slash 15,000 jobs in the wake of the coronavirus crisis.

France would be the second most affected state by Airbus’ decision after Germany, with as many as 5,000 people set to lose their jobs. However, government aid measures and investment in next-generation green jets may help save up to 2,000 jobs, Junior Transport Minister Jean-Baptiste Djebbari hopes.

“The state urges Airbus to ensure that there are as few forced redundancies as possible,” the official told BFM TV on Wednesday. “Airbus faces a very difficult period ahead. The state stands beside Airbus, and beside Air France.”

The plane maker earlier announced that redundancies are necessary for its survival, as the pandemic triggered the “gravest crisis” in its history. The layoffs, which amount to 15 percent of its global workforce of 135,000, are set to be implemented within a year.

Meanwhile, French flag carrier Air France and its subsidiary plan to sack 7,500 employees. The scale of the cuts, which surfaced earlier in the media, was confirmed by Djebbari, who said that the airline should also ensure that it keeps as many workers as possible.

Earlier this month, the French government announced a €15 billion aid plan for its struggling aviation industry, including funds for Air France and Airbus. The measure was meant to save tens of thousands of jobs in the sector.

Airbus enjoyed increased revenues last year after delivering a record number of planes to its customers, as many air carriers turned their back on US rival Boeing over the 737 MAX fiasco. This year, however, the company as well as the entire aviation sector suffered from the fallout of the coronavirus outbreak which brought most travel to a halt. In the first quarter, its revenues decreased by nearly €2 billion compared to the same period last year, while commercial orders fell sharply. 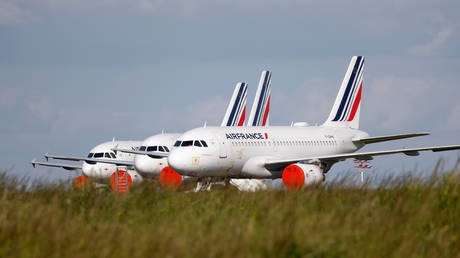 Eurozone inflation at its high...

PS5 restock update: Buy the PlayStation 5 in UK and US TODAY at GAME and Sony Direct