The highway bridge linking Russia and China over the Amur River is expected to be operational as soon as November, according to Amur Oblast Governor Vasily Orlov. The bridge is set to boost economic ties between the two nations.

“The infrastructure and all the services are ready. We expect that the bridge will be launched in November,” Orlov said on his Instagram page this week. He explained that the opening date was postponed due to the Covid-19 pandemic.

The ambitious $300 million construction project began in December 2016 and was completed in November 2019. It was initially expected to be brought into service in April.

The bridge links the cities of Heihe in northern China and Blagoveshchensk in Russia’s Far East that are located on opposite banks of the Amur River. The structure is more than 1km long (0.6 miles) and is a part of a key 19.9km (12.4 miles) two-lane highway project.

The harsh weather conditions in the frigid region have been hampering cross-border trade for years, but the project is set to solve this problem. After the route becomes operational, cargo volume could see an 8-fold increase to four million tons per year, according to Alexander Kozlov, the Russian Minister for the Development of the Far East.

The new bridge should also boost tourism, increasing the number of visitors to Russia from China to two million. However, tourists won’t initially be able to use the road as it will only be available to cargo trucks. It will take another year and a half to build a crossing point that will enable passenger transport, including tourist buses, to cross the bridge. 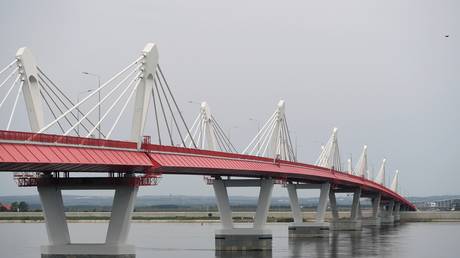