Thanks to his company’s stock market performance, Amazon founder Jeff Bezos keeps getting richer by the week. After adding another 10 billion to his fortune in seven days, his net worth has hit a new high of $183 billion.

Amazon market cap skyrocketed to $1.54 trillion as markets closed on Wednesday after the tech and e-commerce giant’s stock rose nearly three percent to close at a record $3,081 per share. This secured Bezos’ leading position in the global rankings of billionaires of both Bloomberg and Forbes, with the latter saying that he enjoys the highest net worth it has recorded in nearly four decades.

Bezos is now worth more than the gross national product of most countries. According to World Bank data, the billionaire now is richer than Kazakhstan, the richest of the five Central Asian states, with a population of over 18 million people. Bezos’ fortune is also climbing close to Qatar’s GDP, which stood at $183.5 billion last year.

News that Jeff Bezos has become richer than ever coincided with the hashtag #RIPJeffBezos circulating on social media on Wednesday. Though the multi-billionaire is alive and well, Twitter users posted fake messages of condolence along with images of cartoon characters, bald people, or celebrities with the hashtag.

Rip Jeff Bezos can’t belive he drowned in the Amazon River this is the last known picture of him 😭#ripjeffbezos pic.twitter.com/m3VTQko0dI

E-commerce has been booming amid coronavirus lockdowns in most countries across the globe. As people switched to online shopping, Amazon sales increased more than 26 percent to $75.5 billion in the first quarter, exceeding Wall Street’s expectations. However, the online behemoth’s profits fell over the same period, with the company warning that they may slide further due to rising coronavirus-related expenses. 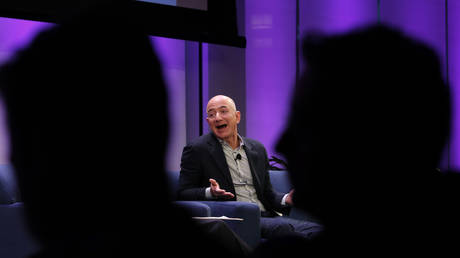