The Covid-19 pandemic may inflict deeper economic pain for countries of the Middle East and Central Asia than previous recessions, the International Monetary Fund has warned.

In its latest regional outlook report published earlier this week, the IMF revised downwards its forecast for economic recovery in the Middle East and Central Asia. According to new data, the regions are set to face a 4.1 percent contraction this year – 1.3 percentage points worse than the body projected in April.

Both oil-exporting countries, whose revenues rely on energy sales, and oil importers, which saw a dramatic decline in service and tourism sectors, will feel the economic impact from the Covid-19 outbreak, according to the report. However, energy producing countries are projected to be hit harder as they face a “double-whammy” of the economic impact of lockdowns and the resulting sharp decline in oil demand and prices.

The threat of economic scarring, which is defined as long-term losses to growth, employment, and incomes, remains a key concern for the regions’ future as the crisis exacerbated pre-existing vulnerabilities. According to the Washington-based organization, fiscal deficits and debt of many nationals have increased by amounts not seen in two decades, making them more vulnerable to a resurgence of the virus.

“The coronavirus disease (Covid-19) pandemic may inflict a deeper and more persistent economic impact than previous recessions in the Middle East and Central Asia (MCD) region did, as the unique characteristics of a global pandemic shock collided with long-standing vulnerabilities in the region,” the report reads.

By 2025, regional economies could be 12 percent below levels implied by pre-crisis trends, the IMF predicted. Given the developments, real gross domestic product (GDP) in the region could remain below pre-crisis trends for at least a decade, it added.

Despite those “stark” challenges and coronavirus uncertainties, the IMF says it sees a path forward. “I think what is important for the region going forward is we now have a situation where it’s clear that diversifying the economy is the best way to get out of this crisis,” Jihad Azour, director of the IMF’s Middle East and Central Asia department, told CNBC.

Oil market recovery remains one of the key factors for oil exporters’ future. While crude prices have rebounded from their historic lows recorded in March of this year, international benchmark Brent crude is still trading nearly 40 percent below pre-pandemic levels. The IMF doesn’t expect oil prices to significantly rise in the near future, predicting them to stay in the range between $40 to $50 a barrel in 2021. This may not be enough for some regional leaders, such as Saudi Arabia, to balance its budget as it needs the prices to be nearly twice as high. 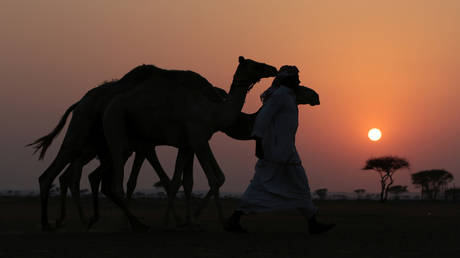 EU-Asia partnership is a ‘crys...