Dust Bowl of money: RT’s Keiser Report looks into the man-made disaster that has destroyed the global monetary system

Dust Bowl of money: RT’s Keiser Report looks into the man-made disaster that has destroyed the global monetary system

RT’s Keiser Report visits the Bitcoin 2021 conference in Miami to discuss current mass-migration in the US, the likes of which hasn’t been seen since the Dust Bowl of the 1930s, when farmers from the Midwest moved to California.

The Dust Bowl was a name given to a period of severe dust storms across the Southern Plains region of the United States during a drought in the 1930s. The disaster caused great damage to ecology and agriculture, killing people and livestock across the entire region from Texas to Nebraska.

Max Keiser and Stacy Herbert say that, today, Californians are moving to states like Texas and Florida to escape a man-made disaster. They point out that rising taxes due to excessive money printing by the government and higher spending on social programs in the more progressive states are forcing people to flee. 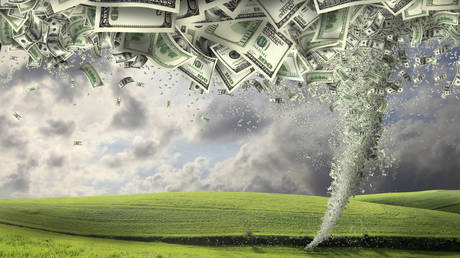