China’s official manufacturing Purchasing Manager’s Index (PMI) for September have come in at 51.5, as compared to 51.0 in August, according to its National Bureau of Statistics (NBS). A figure above 50 indicates expansion.

The reading was above analysts’ expectations; polling by Reuters projected the index to come in at 51.2.

The positive performance of the key sector was driven by strong export and import orders. Indicators showed the expansion of these for the first time this year, at 50.8 and 50.4 respectively, in September – 1.7 and 1.4 points up from August.

The official services PMI was also up, at 55.9 for September from 55.2 in August.

According to Zhao Qinghe, a senior statistician at the National Bureau of Statistics, the strong September data was also due to the simultaneous recovery of both supply and demand.

Economists suggest the week-long Golden Week holidays, from Thursday through to October 8, may be helping, as factories quickened production before the break. The long holiday also spurred consumer demand, Zhao said, according to CNBC. In particular, production of and new orders for food, alcohol, beverage and tea expanded at a faster clip in September compared to August, he pointed out.

China’s manufacturing sector took a hit earlier this year, as factories shut due to large-scale lockdowns to contain Covid-19. 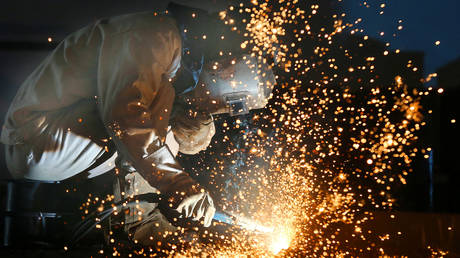