One of China’s largest electric car marques, Nio, is pressing ahead with plans to expand to Europe and beyond. Shares of Nio, which is considered by many as the ‘Tesla of China’, are up by almost 250 percent so far this year.

“We hope in the second half of next year we can begin making some preliminary attempts in some countries that are more welcome to electric vehicles,” said William Li, founder and chairman of Nio, as quoted by CNBC. “We hope to begin with Europe,” he added. Li did not name specific countries, but said preparations were already underway for Nio’s plan to enter major global markets by 2023-2024.

The Chinese start-up listed on the New York Stock Exchange nearly two years ago. Since its public offering, several executives, including one of its founders and the leaders of Nio in both the UK and the US, have left, and there have been many layoffs. As its financial troubles mounted, shares in the company plunged by more than 80 percent from their highs last year.

The Covid-19 pandemic has hit a Chinese auto market already struggling from a months-long slump in sales. According to the Ministry of Industry and Information Technology, automobile sales in the first seven months of the year dropped 12.7 percent from a year ago, with those of new-energy vehicles falling 32.8 percent. New-energy vehicles, which include pure electric and also hybrid cars, posted their first sales increase for the year in July, growing by 19.3 percent.

Nio has managed to acquire a lifeline of seven billion yuan ($1 billion) from investors, among them state-backed entities, as a result of funding talks with the government of the city of Hefei in southeastern China. The company said vehicle deliveries hit a record 3,740 in June and topped 10,000 for the second quarter overall. On Thursday, it announced the launch of its new battery service, which will allow drivers to buy an EV at a lower price by subscribing to the battery pack separately.

The funding talks with Hefei were part of the new Chinese policy to support the auto and electric vehicle industries in the country. China, which is the largest automobile market in the world, has national ambitions to become a global leader in new-energy vehicles. 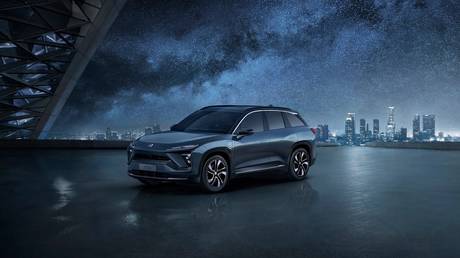 Poland appoints FM who accused Can...

Fury as EU use migrant crisis in B...